Debris Believed to Be from 9/11 Plane 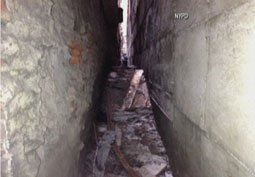 NEW YORK (AP) — The rusted metal aircraft part believed to be from one of the hijacked jetliners that slammed into the World Trade Center in the Sept. 11 attacks came from a wing, not landing gear, police said Monday.

The 5-foot piece is a trailing edge flap support structure, police said. It is located closer to the body of the plane and helps secure wing flaps that move in and out and aid in regulating plane speed. Investigators initially thought it was part of the landing gear because both pieces have similar-looking hydraulics.

Boeing officials told police the part came from one of its 767 airliners, but it isn’t possible to determine which flight. Both hijacked planes that struck the towers, American Airlines Flight 11 and United Airlines Flight 175, were Boeing 767s.

American Airlines had no comment. A call to United wasn’t immediately returned.

Workers discovered the part Wednesday between a luxury loft rental building and a mosque that in 2010 prompted virulent national debate about Islam and freedom of speech in part because it’s near the trade center site. Other World Trade Center wreckage has been discovered at the buildings and around the area in years past.

An inspector on the roof of the mosque site, which is under construction, noticed the debris and then called 911.

Police documented the debris with photos. The twisted metal part – jammed in an 18-inch-wide, trash-laden passageway between the buildings – has cables and levers on it and is about 5 feet high, 17 inches wide and 4 feet long.

The piece was found with ropes that aren’t believed be part of the plane. Police are trying to determine whether someone had tried to lower the piece off the roof at some point in the past, and the ropes snapped or the piece became stuck. There’s no indication that the part was planted in the space, said Paul Browne, chief spokesman for the New York Police Department.

Of the nearly 3,000 victims of the trade center attacks, remains of about 1,000 were never recovered, and sifting the site for possible human remains was to begin Tuesday morning, said the chief medical examiner’s spokeswoman, Ellen Borakove.

The area first will be tested as part of a standard health and safety evaluation for possible toxicity, she said.

Police said the part would be moved to a more secure location likely later this week, where a determination will be made about where it will go permanently. In the past, such pieces have been treated as historical artifacts. For example, the New York State Museum in Albany has in its collection a large landing gear piece that fell through the roof to the basement at the same location. It was placed there in 2002.