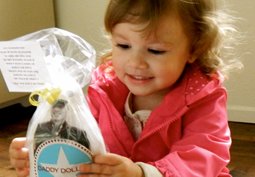 Tricia and Nikki, two fabulous Marine MilSpouses started Daddy Dolls Inc. after seeing how hard Military deployments were on their children. With both their husbands being deployed twice in less than two years, their little ones were having a hard time. They looked for a way to make the separation easier for their kids. That’s when the idea for Daddy Dolls was born. After they saw the amazing response from their little ones, they realized there were many kids out there, not just Military, who could use a doll of that special someone from far away.