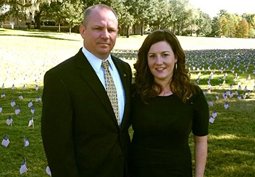 Katie Moisse for ABC News reports on how couples therapy is drastically improving relationships where someone suffers from PTSD (read the original post here):

Michael Waldrop came home from work with a bottle of Jack Daniels and a letter that read, “Report for duty in 30 days.”

The married father of two young children – a member of the Army’s Inactive Ready Reserve – had been plucked from his job as vice president of a contracting company to serve on the front lines in Afghanistan.

It was 2005, four years into Operation Enduring Freedom. And Waldrop – businessman-turned-Army Captain – found himself leading 60 soldiers through some of Afghanistan’s most violent villages.

“All I wanted was to return to my family,” said Waldrop, who earned a Purple Heart and two Bronze Stars during his 18-month deployment. “I thought coming home would be like heaven. I never thought there would be adjustment issues.”

But Waldrop had changed. Long after the scars of a shrapnel wound healed, the painful memories of fallen friends and injured civilians lingered. He had PTSD – anxiety in the form of anger, numbness and nightmares.

“I knew he was a different person. And I was, too,” said Marnie Waldrop, who was forced to juggle work and single parenthood amid the looming fear of her husband’s death. “But the last thing I wanted was to end up divorced like the statistics say.”

According to statistics, veterans with PTSD are twice as likely to separate from a spouse or divorce. But a new study suggests couples therapy can cut PTSD symptoms and keep families together.

“The best way to think of it is as a PTSD treatment that happens to be delivered to couples,” said study author Candice Monson, professor of psychology at Ryerson University in Toronto. “We tried to take what we know about trauma recovery – that social support and interpersonal relationships are some of the most important factors for overcoming traumatic events – and incorporate that into PTSD treatment.”

The study of 40 couples plagued by PTSD found that those who participated in 15 therapy sessions reported relief from PTSD symptoms and improvements in relationship satisfaction – even three months after the sessions stopped. The findings, published Tuesday in the Journal of the American Medical Association, suggest spousal support can boost the response to PTSD treatment.

“We would never say to a cancer patient, ‘You’re going through this treatment alone,'” said Monson, describing the double standard for psychological illness. “We would encourage loved ones to be there for the treatment, and understand its course and how they can help.”

“The symptoms of psychiatric illness have a tremendous impact on those who love the person suffering. And to the extent that partners can be engaged in the treatment and educated about the condition and how they can help, the better the outcome for everyone,” she said.

Michael Waldrop said his wife dragged him “kicking and screaming” to couples counseling.

“She was my new ground commander,” he said. “And I’m glad. It was a blessing. I didn’t realize the impact of PTSD.”

Over three months of weekly sessions and the odd one since, the Waldrops were able to work through the fear and anxiety that put their relationship at risk. And now they’re helping other military couples do the same. In 2009, they launched the Orlando-based Camaraderie Foundation, a non-profit that helps cover the cost of private counseling for veterans and their families.

“These warriors, they’re not trained to raise their hands and say, ‘I need a little help over here,'” said Michael Waldrop. “But it’s a sign of strength to raise your hand. And when they do, by gosh we better be there.”