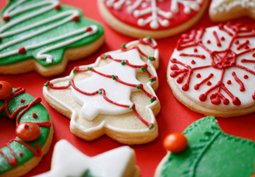 While many are at home wrapping last minute gifts or maybe snuggling next to a fireplace with family on Christmas Eve, Lance Cpl. Kadie Tallentire will be standing outside in the cold, guarding the gates of Marine Corps Base Quantico. She is one of many Marines who will stand duty during the holiday.

Unlike a normal day, where Tallentire checks hundreds of cars that flow through Quantico’s gate, Christmas Eve and Day will be slow and rather mundane.

“We pretty much load up, go out to the gate and just wait for traffic, smile at people − and wait for traffic,” said Tallentire, who is a Pennsylvania native. “This weekend we’ll probably only see around 20 cars.”

There won’t be much hustle and bustle aboard Quantico on Christmas Eve, except at the Chapel Annex, where civilian and military volunteers will spend the evening stuffing bags with cookies, not for Santa, but for Marines on duty.

Their effort is part of the “Cookie Drop” event, which is an annual custom for the traditional Protestant congregation that worships at the chapel on base. Each year, church members and volunteers distribute cookies, brownies and desserts to around 150 Marines and other watch standers who work on Christmas Eve as a gesture of appreciation.

Church members, Alan Westin and his wife Carol, have been volunteering for nearly seven years.

“We want to let people know that we care that they’re working on Christmas Eve and showing up with a bag of cookies reflects our care and love for them,” said Westin, a Dumfries resident.

No one likes standing duty on Christmas Eve, but someone has to do it — this is a way of saying thanks, added Cmdr. Chuck Hodges, Marine Corps University Chaplain.

Whether assigned or volunteered, standing duty on Christmas is a sacrifice that Oklahoma native and volunteer, Master Gunnery Sgt. Norman Crowe, artillery enlisted assignment monitor for Manpower and Reserve Affairs, can relate to on a personal level.

“When I was single, I threw myself on that grenade because I wanted to make sure Marines with families were able to go home for Christmas,” Crowe said.

Crowe, who will volunteer with the “Cookie Drop” event for a second year said his goal is to give back.

For Tallentire, the gesture is greatly appreciated.

“I was on duty in Okinawa for the past two years, so I haven’t had a Christmas to myself for three years,” she said. “It’s really nice to see that those guys are nice enough to bring us stuff.”