Comforting a Child After the Loss of a Pet 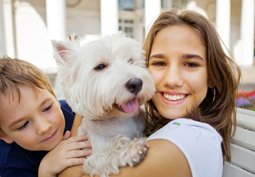 After a beloved pet dies, grieve with your family through a mix of tears and funny tales.

Even pirates cry. So says the Mem Fox book “Tough Boris” (Sandpiper, 1998), the story of a pirate whose parrot died, and “he cried and cried.”

“Grief is not a bad thing,” says M. Patricia Hogan, a psychologist in Charlotte, N.C. Sadness is a big part of coping with the loss of a pet, but there are other feelings, too, such as anger and denial, and it’s OK to feel them all.

Rituals are especially important for children grieving a pet, Hogan says, because they help them learn about the natural life cycle while honoring and saying goodbye to their furry friend. Ideas include: plant a tree, put together a photo album, or contribute to an animal-related cause like the Humane Society.

Talking, writing or drawing about your beloved companion can be healing, as can reliving memories with friends and family members.

The mother of a preschooler in Davidson, N.C., agrees that sharing stories is helpful along the grief journey. “We tell funny stories to keep our dog’s memory alive,” she says.

Her daughter also made an angel at Build-a-Bear that wears their dog’s tag.

The mom also bought “Dog Heaven” by Cynthia Rylant (Blue Sky Press, 1995), and has shared the book with other parents trying to guide their children through grief.

In the brightly illustrated book, dogs have fields to run in, children to play with and funny-shaped biscuits to eat.

Rylant wrote a similar book for cat owners, “Cat Heaven” (Blue Sky Press, 1997). For cats in heaven, there are kitty toys everywhere and nobody gets stuck in trees.

Libraries and bookstores offer several children’s books related to the death of pets. Before you share one with your child, read it to see whether it matches her age and maturity level, as well as your religious beliefs. A preschooler, for example, typically has no understanding of the permanence of death.

One book about grief from a little boy’s point of view is “The Tenth Good Thing About Barney” by Judith Viorst (Atheneum Books, 1987). The boy, whose cat Barney dies, is encouraged to think of 10 good things to say at the cat’s backyard funeral. The book also deals with the cycle of life and death.

“I’ll Always Love You” by Hans Wilhelm (Dragonfly Books, 1988) is about a boy and his dachshund, Elfie, who grow up together. Every night he says to her, “I’ll always love you.”

Elfie is full of pep but slows down as she gets older, until one morning, she doesn’t wake up. Soon afterward, the boy refuses the offer of a new puppy; he’s not ready.

Another choice is “Goodbye Mousie” by Robie H. Harris (Aladdin, 2004). A boy wakes up to find that his pet mouse doesn’t move when he tickles his tummy. The book follows the boy through different emotions, including anger at the mouse for dying. The boy’s father explains death to his child and helps him prepare Mousie’s funeral.

Talking about the mouse, burying him in a special box and saying goodbye all help the boy feel better.

Some parents comfort their kids – and themselves – with the idea of a “Rainbow Bridge,” a place “just this side of heaven” where a pet goes when it dies. There, an animal’s health is restored and it awaits its owners. A new version of the story is “The Legend of Rainbow Bridge” by William N. Britton (Savannah Publishing, 2011). The website rainbowbridge.org is one of several message boards and tribute sites based on the story.