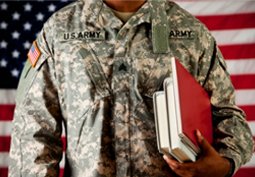 WASHINGTON – The students in the Saturday morning class trickle in and, as they introduce themselves around a table, reveal far more intimate biographies than just name and hometown.

One confesses to demons he struggles to control. Another says he’s here to find a community. “Forgive me,” an Iraq war veteran begins haltingly. “I have to use notes. I have a brain injury.”

The students are participants in a veterans writing seminar at George Washington University, where for two days they immerse themselves in the basics of the craft and learn how to plumb for therapeutic and creative purposes their experiences in places like Iraq, Bosnia and Vietnam. The class is a non-credit weekend seminar open to veterans and their relatives, but the university plans to soon adapt the model into a for-credit semester-long course for student veterans.

The seminar is part of a trend of veterans-only courses offered at colleges and universities, part of a concerted effort to cater to a population that tends to be older, more experienced and farther removed from the classroom than traditional undergraduates.

Introductory courses on campus life help veterans navigate the unfamiliar terrain of a college environment while academic classes set aside for veterans are designed to help them learn in smaller settings and alongside peers with similar backgrounds. The courses are often peppered with military references and sometimes taught by fellow veterans.

“Different institutions are using veterans-specific courses for a variety of reasons, but largely it has to do with ensuring that veterans have a smooth and comfortable transition from the military culture into the civilian culture,” said Meg Mitcham, director of veterans programs at the American Council on Education, a higher education association.

Still, not all courses have had staying power. It’s not simple to find courses that appeal broadly to veterans of different ages and generations, not all veterans seek to identify themselves as such, and there’s not universal agreement that veteran-oriented classes are the best way to acclimate a group that may already feel isolated.

Michael Dakduk, executive director of Student Veterans of America, said that while there are obvious benefits to the model, he’s also heard some say: “Does it necessarily help with re-reintegration, and specially integration into a college campus, if they’re being removed from the student population?”

The courses are but one example of services that colleges are offering to a surge of veterans who have enrolled after the Post 9/11 G.I. Bill, which expanded tuition benefits. An ACE survey found that 62 percent of the 690 colleges and universities that responded provide programs and services, including post-traumatic-stress counseling and specially trained staff. The Department of Veterans Affairs says 441,710 veterans and eligible beneficiaries are enrolled this fall in educational programs using Post 9/11 G.I. Bill benefits.

That focus may only intensify now that the Iraq war has ended and the war in Afghanistan is winding down, with new veterans seeking education.

Specialized courses enable brick-and-mortar institutions to maintain a toehold in the veterans’ education market at a time of increased competition, including from for-profit career colleges and technical programs that critics say use deceptive marketing to target military families.

“Just like the rest of the country, people in the academy over the decade-long conflicts have come to recognize that we have this tremendously small number of people who are bearing this burden for society,” said Derek Malone-France, executive director of GW’s Writing Program. “There’s this real opportunity to collaborate between the academy and military, which is historically a very fraught divide.”

“They’re back now, and they need it,” Malone-France said. “They need to feel that they have a mission. Collectively, they are saying among themselves, ‘What we can we do? How can we mobilize?

The courses acknowledge veterans’ unique academic and social needs: Incoming freshmen who have seen combat may be less keen on dormitory scavenger hunts than the average 18-year-old undergraduate, but having been away from class for longer, they’re also more likely to benefit from advice on balancing their coursework with professional, family and financial responsibilities and adjusting from the regimented military to the freedoms of college life.

“Having faced some life-threatening situations in the military, I was actually more fearful of the choices that I had when I entered college. I didn’t have someone basically saying, ‘Here is your exact daily schedule’ or ‘Here is your objective,'” said Michael Samano, a Navy veteran who has taught veteran-centered courses at Lane Community College in Eugene, Ore.

West Virginia University, which has about 900 students using VA benefits, offers veterans courses in history, public speaking and on transitioning from military to student life. Cleveland State University offers a veterans-only section of Introduction to University Life, a required freshman class. Collin College in Texas has provided various veteran-friendly classes, including a history class that teaches students how to do an oral history project and that is open to general education students too.

A University of Iowa class, limited to veterans and service members who have previously deployed, requires students to interview service members from a different era and covers everything from college study skills and reading comprehension to drug addiction and healthy sleep habits.

“You have the ability to speak your mind about things that normal people aren’t really going to understand. They may see a movie or something, but there’s no substitute for being there,” said Gene Rovang, a 46-year-old veteran enrolled in the Iowa class. “As a veteran, when you talk about your experiences, it’s just very easy to communicate to a roomful of veterans compared to a roomful of civilians. Most people don’t have a job where your job is to kill people.”

At Wright State University in Ohio, a psychology class frames discussions of behavior and leadership around the Abu Ghraib prison abuse scandal and Guantanamo Bay, said Larry James, a retired Army colonel who teaches it.

“I can talk their language,” said James, the former psychology department chair at the Walter Reed Army Medical Center. “Many of them, the posts and bases they’ve served on in Iraq and/or Afghanistan, I’ve been there too.”

Still, the results have been uneven. Some classes, failing to generate enough interest from veterans, are no longer offered. Some have been opened to civilian students.

The University of Michigan-Flint ran veterans courses on philosophy and the natural sciences in 2009 and 2010, but stopped offering them in part because they weren’t drawing enough students. Stevens Wandmacher, a Navy veteran who taught a veterans’ course in philosophy, said his students — who ranged from combat veterans to those who served stateside — didn’t all have the same needs or experiences that could be satisfied through a single course.

“I think there are better ways of meeting the needs of the student-veterans and getting them into the life of the university on a large scale,” Wandmacher said. “That was some of the criticism when this was set up: ‘Why are you isolating them and keeping them away from everybody else?’ To some degree, I think there was a little bit of merit in that criticism.”

The GW writing seminar is taught by Ron Capps, a professional writer and 25-year veteran who says he turned to writing to deal with personal trauma. The seminar, taught to roughly 15 veterans from different wars and generations, is a two-day cram session on writing basics framed around famous war and military literature.

The importance of scene setting and vivid detail is illustrated with an excerpt from “A Farewell to Arms” in which Ernest Hemingway describes a protagonist’s leather boots “shiny with oil” and Austrian sniper rifle with the “blued octagon barrel.” Capps uses James Bond movies to illustrate character archetypes. A clip from the war movie “The Thin Red Line” gets the class talking about capturing the anxiety of combat. He reminds them that they’re part of a proud legacy of veterans to nurture literary ambitions.

Details matter, Capps tells the class, but don’t suffocate the reader with military lingo and acronyms. Students who need psychological help should go get it, he advises matter-of-factly, and not expect it to come from writing alone.

“We’re not therapists. We’re not medical people at all,” he explained in an interview before the class. “We’re writers. Writers and others have known the healing power of arts.”