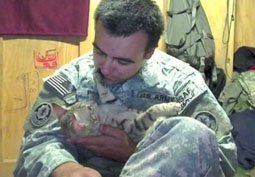 When Sergeant Jesse Knott took in an abused stray kitten during his military service in Afghanistan, he had no idea that the little cat would someday save his own life.

Knott first encountered the kitten in June 2010 when he stumbled onto the base, showing signs of neglect and possible abuse. After a few visits, the tough soldier could no longer stand to watch the kitten suffer, and took him in.

“The final straw was when I found him limping one day with a bloody injury to his toe pad and what seemed to be a possible hip injury,” Knott told the Clackamas Review. Although soldiers are not permitted to keep pets, Knott broke the rules and made room for the feline in his office.

Knott named the newly adopted stray Koshka, which is Russian for “cat,” and he soon became the unofficial mouse-catcher of the base.

It was clear that Knott couldn’t keep the injured cat safe while living in a war zone, and so he made costly and perilous arrangements for Koshka to be sent from Afghanistan all the way to his home-state of Oregon.

“Shortly after I treated his wounds, we bonded and I knew I had to keep him safe until I could find a way to rescue him,” Knott recalled.

When a suicide bomb attack took the lives of the soldier’s closest friends, Knott spiraled into a deep depression that lead him to contemplate ending his own life.

“I was so devastated that I lost all hope,” Knott said in an interview with WBTV. In the darkest moment of Knott’s life, it was Koshka who let him know that life was worth living.

“With tears in my eyes he locked eyes with me, reached out with his paw and pressed it to my lips, then climbed down into my lap, curled up and shared the moment with me,” Knott explained to the Clackamas Review.

Knott knew that he couldn’t leave this world, not yet. He had to save Koshka.

With the help of a brave interpreter, who risked his life to transport Koshka to Kabul, the little cat began a $3,000 journey to Oregon City.

Knott’s parents welcomed the hero cat into their home, where he lives today, with open arms and tears of joy.

“He was my saving grace,” Knott told WBTV. “He kept me alive during that tour.”