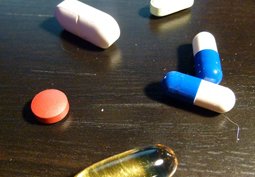 It sounds too good to be true: Throw back a few pills each day, and enjoy a remarkable boost in mental health — while suffering none of the side effects common to mainstream pharmaceutical interventions.

Now, the military wants to find out if this idyllic scenario can be transformed into a reality, and one that could curb the growing number of suicides among soldiers and veterans. Earlier this week, they announced a three-year, $10 million study on whether omega-3 supplements can work as preventive medicine for at-risk personnel.

“The thinking is that the areas of the brain that are affected by this lack of a regenerative advantage of omega-3 also play a role in depression and other emotional disorders,” Dr. Ron Acierno, director of the PTSD clinic at the VA medical center in Charleston, told Reuters. “And, by proxy, suicide.”

Researchers plan to enroll 320 personnel and veterans already deemed “at-risk” — either they’ve talked about suicide, or are dealing with some combination of post-traumatic stress, alcohol abuse and depression. Some study participants will ingest two omega-3-laced “juice boxes” every day for six months, while others will receive a placebo. The study protocol suggests they’ll be tracked for around three years.

If you’re low on omega-3 knowledge, here’s the deal: These fatty acids are considered vital to human functioning, and are found in some foods (namely fish, walnuts and some plants). In recent years, omega-3 fatty acids have been linked to a ton of health benefits, including better brain health, reduced blood pressure and cholesterol levels, and even the alleviation of arthritis, asthma and menstrual pain.

There’s no question that omega-3 fatty acids are beneficial, and that most of us could use more of them. Unfortunately, much of the breathless enthusiasm surrounding omega-3s is based on insufficient evidence bolstered by breathless media hype. A major analysis in the Journal of the American Medical Association, published earlier this year, put a major dent in the claim that omega-3s can improve cardiovascular health. And as Forbes contributor David DiSalvo noted recently, a plethora of studies on omega-3s and mental health have found benefits — but definitive links between omega-3s and brain health have yet to be established. Furthermore, plenty of questions about the supplements remain: Who should take them, how often and how much, and to treat or prevent which kinds of brain-based ailments?

The military’s new research program, though studying a small population, might at least help answer some of those questions. Beyond their basic evaluation of soldiers and veterans considered at-risk of suicide, the researchers are also interested in determining whether all soldiers (and, perhaps, some civilians) would benefit from some level of omega-3 supplementation to ward off mental health problems.

Obviously, those are big questions — ones that probably can’t be resolved in a single study. It’s also worth noting that this research is, in part, being conducted by investigators affiliated with the Samueli Institute in Alexandria, VA. As I reported in a feature for Wired last year, the Institute has cultivated a lucrative Pentagon partnership bolstered by millions in questionable Congressional earmarks. Their overarching goal is the investigation of myriad “alternative” treatment options — including yoga, acupuncture, reiki and meditation — for soldiers.