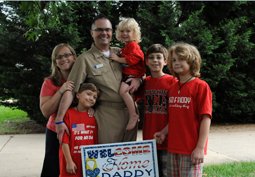 My middle schooler son’s proclamation, on a Friday afternoon, many months ago, caught me off guard but did not completely surprise me.

Zack came home from school and told me that another eighth grade boy slammed his locker shut as soon as he opened it and then another boy tried to trip him as he got off the bus. It really did feel like my boy had been attacked by two armies.

I was immediately on high alert.

“They” say that marijuana and alcohol are gateway drugs, I say that locker slamming and tripping are gateway actions to bigger bullying.

We deal with a lot on the homefront: absence of a father on deployment overseas and a child with Asperger’s Syndrome for instance, but I have felt lucky to have dodged the bullying bullet thus far.

I’ve read the articles and the blog posts, watched the tv stories and thought, “thank G-d, at least we don’t have to deal with that.”

So, that Friday felt like D Day to me.  The bomb had hit our home and I was not going to crawl into a bunker (my bed) and ignore it.

I have a lot of practice taking strategic action because I am a military wife and am used to fighting my way through rough terrain.

Thankfully, we have great counselors and support at our local schools.  I immediately emailed the counselor and alerted her to what happened and asked what we should do.  She told me to come to school the next school day so we could talk in person.

So, I met with her and the school Resource Security Officer.  They both assured me, leaving no doubt in my mind, that they take bullying very seriously and presented the three options of the next step for us to take:

I opted for number 2.  The counselor, officer and I agreed that we wanted to give the kids the chance to do the right thing.

So, we set plan in action.  After I left the school, the counselor pulled the locker bully out of class.  She told him what had been seen “by teachers near the lockers” and what the consequences would be if it happened again, even once.  She also talked with my son so that he would know that the adults at the school are on his side.  For an Asperger’s kid especially, this is probably one of the most important parts of the “story.”  My Aspie needs to know that the adults in the situation are on his side and will be there for him, knowing adults are approachable and receptive helps him feel safe in school.

The counselor and my son teamed up to try to figure out the name of the “tripper” on the bus, and then she took the same steps with the bus bully.

Zack returned home from school with shoulders slumped.  I asked him what happened and listened to him tell me that the locker kid held his locker shut while my boy tried to open it at the end of the day and that the bus boy had tried to trip him again.  To make matters worse, locker boy rides my boy’s bus and continually blocks his way from sitting at the back of the bus.

I called the school counselor who took the next step with the bullies.  I was not told what the step was but was assured the proper consequences were given.

A few weeks ago, my son came home from school to tell me of a funny interaction with a child in his class.  He and the boy are working together and having fun doing it.  I asked my son to repeat the name of the boy he was talking about.  I asked him, isn’t that the boy who was bullying you?  His response was the best.  Better than I could have ever imagined: “Yes, Mom, but that was months ago.  We are over it and are friends now.”

Erin is a parenting coach, writer, Navy wife and mom to 4 sons (one who has Autism Spectrum Disorder). She recently parented solo during her husband’s 20 month deployment.  Her boys are 14, 12, 8 1/2  and 5 years old. The Been There Done That Mom offers insight into military family life and no nonsense parenting.