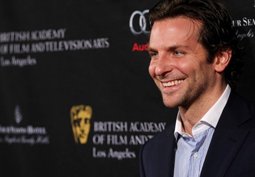 Bradley Cooper has proven to be so much more than just a Hollywood hunk with pretty face, gaining critical praise this year for his moving portrayal in “Silver Linings Playbook” of Pat Solitano Jr., a young man who suffers from bipolar disorder. And Cooper takes the elevated role seriously, becoming a sort of an advocate for mental-health reform; yesterday, along with David O. Russel, he met with Vice President Joe Biden to discuss “acceptance, understanding and access to treatment for those with mental illness” in the wake of the Sandy Hook shootings.

Now he’s seeking out another emotionally charged, complex role: that of Chris Kyle, the “American Sniper” author and Navy SEAL who was shot and killed last week, allegedly by Eddie Routh, a war veteran believed to have been struggling with PTSD.

Cooper, who had bought film adaptation rights to Kyle’s book in May 2012, told NPR’s Terry Gross that he was shocked by news of the sniper’s death. “You know, the first draft was coming in this week, and Thursday I was at Walter Reed Hospital meeting with veterans who have post-traumatic stress disorder, among many other ailments, and then all of a sudden I hear this thing and I just couldn’t believe it,” he told Gross.

Cooper plans not only to move forward with the movie, but to fast-track it given the current political climate and circumstances behind Kyle’s death: “His story, first of all, needs to be told and it’s also relevant on two fronts. One, gun control, and two, the need to address this — the many soldiers that are coming back with post-traumatic stress disorder.” He continued:

I mean, the thing about it is, you know, medicine has evolved to such a state that, you know, more soldiers are coming back and they’re going to assimilate into the culture and if we don’t address the mental state along with the physical state, you know, it’s going to be a problem.