Boy Sets Up “Lick It List” for Dying Service Dog 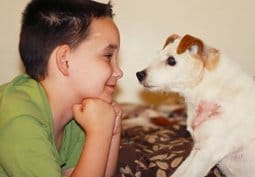 Cole Hein, an 11-year-old boy from Canada, has been best friends with his 14-year-old dog, Bingo, since 2005. Bingo was given to his family by the Ontario-based National Service Dogs due to an undiagnosed medical condition that causes Cole to stop breathing. Although Cole now has control of his condition, Bingo has helped save his life several times over the last few years. When he stops breathing, Bingo barks to alert others that her owner needs CPR, according to the Winnipeg Free Press.

Bingo, who was inducted into the Purina Animal Hall of Fame in 2010, according to Modern Dog Magazine, was diagnosed with a life threatening canine Cognitive Dysfunction Syndrome. Cole has taken this devastating news as a true hero and is celebrating his best friend in a very special way. He set up a “Lick It” List for Bingo:

Visit Bingo’s  Facebook page to learn how you can help send a treat or some love.