Boy Made Honorary Marine Before Death 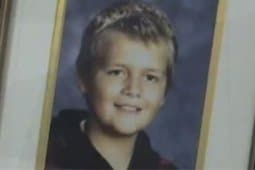 Throughout his 12 years, Cody Green battled leukemia like the bravest of warriors. For that, he was named an honorary Marine just before he died.

The Indiana boy was first diagnosed with the disease at 22 months, and drew strength from the courage of the Marine Corps as he fought his way into remission three times, WLFI reports. But as his body struggled to fend off the infection that ultimately took his life on Saturday, the Marines stepped in to show how much they respected his will to live.

“They decided Cody, with the strength and honor and courage he showed through the whole thing, he should be a Marine,” Cody’s father, David Snowberger, told the news outlet.

Cody was given Marine navigator wings and was named an honorary member of the United States Marine Corps. One member stood guard outside of his hospital room for eight hours straight the night before Cody passed away, according to WLFI.

“He never asked ‘Why Me,’ and fought the illness with grace and humility,” Cody’s obituary reads, “never complaining about his treatment or care, saying ‘Thank you,’ to the many healthcare professionals that cared for him.”

Read more and check out the video here.