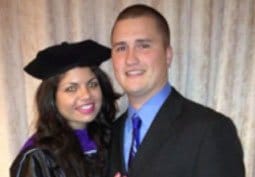 Loneliness drove me to start blogging in July 2012. My significant other Tim, a United States Navy Sailor, had been deployed.

Though we had only been apart for a little over a month, we would remain apart until the end of that year. My blog, City Girl Finding Her Place in the World, has provided me with a platform on which I can openly express myself and connect with others in the process. I have “met” many military spouses in the blogging community whom are or have gone through much of the same situations as myself.

As a native New Yorker and aspiring attorney, I never pictured myself being in a military relationship. And then I met Tim in January 2011. I was attending law school in New York City and he was stationed in Norfolk, Virginia at the time. That distance was bearable—at least much more so than the distance between New York and Hawaii, where he PCS’ed to in October 2011. Fortunately, we were able to visit each other every few months. Then, Tim deployed to Europe in June 2012 and I wanted to find ways other than merely Skype to cope with the distance and seven-month-long separation. I turned to blogging, which has since helped me tremendously.

Having a network of military spouses who can relate to how you are feeling is especially helpful when, like me, you do not have close relationships with military spouses “in real life.” Though family and friends can be a great support system (and mine have been), sometimes it just helps not to have to explain to people “how you do it” or hear that “you knew this would happen” regarding separations. Sometimes a seemingly simple “I know how you feel” is just what is needed. Blogging has provided me with a network where it is possible to receive that support.

Tim and I have said “see you soon” more than we have liked and it has not gotten any easier. The distance, however, is coming to an end. As you might guess, it would be quite hard to find work as an attorney due to moving around every few years (though the American Bar Association has adopted a resolution, which if adopted by states would greatly assist military spouses who are attorneys). Therefore, Tim is planning on ending his active military service next summer to finish school and pursue other career avenues while I pursue a legal career. We are currently living together in Hawaii, where I joined him following my July 2013 bar exam.

At City Girl Finding Her Place in the World, I often blog about my military relationship and its obstacles, as well as issues facing the military community, i.e. suicide and mesothelioma cancer.

I invite you to visit my blog, and perhaps even consider starting your own if you are looking for a network of military spouses to connect with. I look forward to “meeting” you all.

Jackie is a recent NYC law school grad who’s loving her man long distance. Some of her interests include traveling and reading.