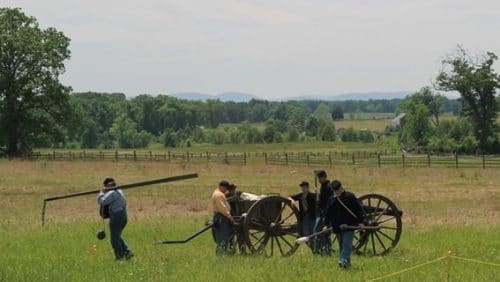 On Holiday: A Trip to Gettysburg, PA

Looking to take a family trip somewhere meaningful this summer, where you can view some of our nation’s history and natural beauty? Guest blogger and experienced traveler Caro Karlsson recently spent a weekend roaming around Gettysburg, PA. She shared her travel memories with us and offered a few insights for making the most of a weekend excursion there. Here’s what she had to say…

Patriotic holidays like Memorial Day are the perfect time to honor the country’s fallen. The temperature is ideal for being out of doors and, being from Northern Virginia, I knew a road trip to one of the many nearby historic sites would satisfy my immediate urge for a summer vacation. This year I chose to spend my three-day weekend in Gettysburg, Pennsylvania. I found out there’s a reason people who have been to the battlefields at Gettysburg have appeared shocked when I’ve told them I’ve driven by but never actually visited the site. It’s the same reason people rave about the expert tour guides at that park. And now I know for myself.

I began my visit at the Soldier’s National Cemetery. The parking lot across the road was shady and it was a short walk to the cemetery’s entrance. The cemetery itself is serene, well groomed, and makes for easily strolling at the top of Cemetery Hill. Upon entering the gates, to the right is the only monument in the world to a speech — The Gettysburg Address.

Across from it is the red brick rostrum with its clinging floral vines. When you go, attend the ranger walk and you will discover why neither of these two landmarks in the cemetery actually mark where Abraham Lincoln gave his most remembered speech. And you will learn about the cemetery’s witness tree, an aged honey locust that experienced and survived the July 1863 battle though Cemetery Hill was a primary Union stronghold. You will learn that the cannons are not merely decorative.

My next stop was the nearby visitor’s center. I had purchased combination tickets online for the film, cyclorama and museum the prior week, so was able to bypass a very long line and head directly to will call with my confirmation print-out. The agent behind the counter handed me a brochure, briefly recounted where to go for the day’s ticketed events, and pointed outside to the pickup location for the next day’s tour. He made it seem so easy that I simply grabbed the brochure and walked away. It was only afterwards that I realized I was holding a bi-fold packet that contained brochures and all of the tickets for my purchased events. The packet had my name on it; it had been waiting for me. I was most impressed with the ease of pickup, considering that so many others were still standing in line.

The film was narrated by Morgan Freeman. Sam Waterston spoke for Abraham Lincoln. Through the use of contemporary photographs combined with other images, it was one of the best edited historical landmark acclimation films I’ve ever attended. From there one ascends an escalator to view the 130-year old cyclorama depicting the battle. With its combination real scenery melding into the French-painted circular canvas, it was a showstopper. And the museum walk-through that followed was extensive in length and wended viewers through an expertly curated collection. This is why people rave.

And then there’s the farmland battlefield.

On a sunny, cloudless day with the birds singing, it is difficult to imagine any conflict being played out upon the lush green fields dotted by farms. And the property is so vast one cannot easily fathom the thousands of soldiers who perished where they fought.

Gettysburg Cemetery Markers for the Unknown

The only way to bring it into context is to hear the story from an expert guide. Private tours are available at a reasonable cost, but I selected the modestly priced Battlefield Bus Tour and will never regret my decision. The two-hour tour, led by licensed battlefield guide Joy Boden, was phenomenal.

During the ride, and at every planned stop, Boden dramatically scoped out a chronological play by play of each day of the battle. Skillfully, she put us in the minds of the local citizens, soldiers and generals — from the first hint of trouble when the Confederates entered the area and stole supplies from farmers, to the barefoot reinforcements called down from the hills, the securing of Little Round Top and tragedy of Pickett’s Charge, straight through to the post-battle clean-up. All the while allowing us time to admire the hundreds of monuments lining the battlefield and its nearby tree line, driving home the vastness of the armies and their struggles to maintain strategic positions.

After two days of learning about this nation’s bloodiest battle hands on, I appreciated a retreat to the great tourist town of Gettysburg, with its old houses converted into souvenir shops, and top notch pubs and eateries, including several ice cream shops. There are plenty of in town hotels for those who want to stay close to the action, or larger chains at a drivable distance. Parking was readily available.

My Memorial Day weekend in Gettysburg allowed me to accomplish my goal to kick off summer yet remember the honored dead of past and present — those who have contributed so much to this country and our freedom. Gettysburg is hands down one of the best American tourist destinations I have ever visited. I have officially joined the ranks of the ravers.

Caro Karlsson is the author of “Timing”, a quarter-finalist novel in the 2014 Amazon Breakthrough Novel Award contest. Caro grew up in a military family and works in online travel technology. She enjoys traveling, tending her garden, and volunteering in her community. You can read more about her at https://about.me/carokarlsson.

Have you made any historic discoveries of your own in Gettysburg or on a similar excursion? Share with us by commenting below or by clicking on “Tell Your Story“.

10 Things Your Military Family Will Love About Fort Riley

MilFam Travel: 10 Things to Do Near Fort Sill, OK