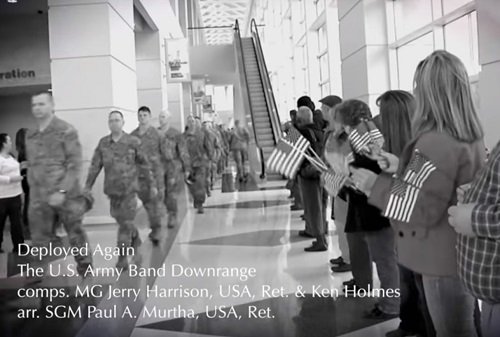 In celebration of Military Spouse Appreciation Day, May 12, 2017, songwriter Jerry Harrison (Ret. Army Major General) has shared his tribute song, “Deployed Again”, with us. He dedicates it to all military families.

Here is what he shared with us about how the song came to be:

I recently wrote a song “Deployed Again” as a tribute to military families. My co-writer is Mr. Ken Holmes. After hearing so many stories from spouses and families, I felt I needed to honor them in some way. The Army Band group Down Range performed it at the AUSA annual Marshall Dinner in 2015 and 2016. … this is a fitting song to those who have suffered so much over this long war. I wrote the song then found Mr. Holmes, who lives in Nashville and has been in the music business.

We’re glad he found a way to bring his song to life for all to enjoy by teaming up with Ken. You can read more of Jerry’s story here.

And listen to the song here: