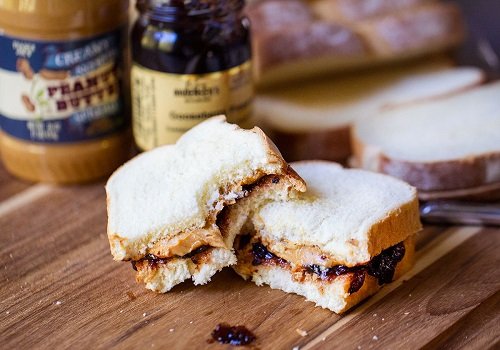 The Military Origin of PB&J You’ve Never Heard Before

By the time they graduate high school, the average American will have eaten more than two thousand peanut butter and jelly sandwiches. Maybe that’s why April 2 is designated as National Peanut Butter and Jelly Day in the United States. After all, the U.S. alone consumes $800 million in peanut butter annually. But did you know that it was the U.S. Military that started this lunchtime craze?

Peanut butter and jelly sandwiches were first mentioned in a 1901 issue of The Boston Cooking School Magazine of Culinary Science & Domestic Economics as a unique and occasional treat. That might sound funny now, considering how PB&Js have become the definition of a quick and casual meal, but it took some time to reach this status.

The History of Jams & Jellies

Jams and jellies have been around since the Middle Ages. They were first served in silver dishes to the upper-class dinner guests of royal families. This perception changed over time as fruit became more accessible to lower classes and as civilizations started to spread across the world. In early American colonies, for instance, fruit preservation became a necessary way of storing food for the winter. Jelly was usually made at home with fruit from the family garden.

The American food industry began to industrialize in the early 1900s, making way for Dr. Thomas Branwell Welch to launch his own grape juice company. Welch’s company expanded to making grape jelly in 1918, and the U.S. Army bought the entire inventory and shipped it to France for American soldiers in World War I. The troops brought the demand for grape jelly back to the States with them after the war, and Welch’s trademark Concord Grape Jelly debuted in 1923.

The popularity of peanut butter arose in stages, as well. Several people have been credited with creating the first iteration of peanut butter, but it’s generally agreed that early recipes are a far cry from the creamy treat we enjoy today. Instead, the bland pastes were created by doctors as a protein supplement for their patients with missing teeth. A more flavorful product was introduced to audiences at the 1904 World’s Fair in St. Louis. It was viewed as a high-class health food and started appearing in finger sandwiches with pimento cheese and watercress at fancy parties and high teas. The elite status of peanut butter can be partially attributed to the instability of its early formulas. They went rancid quickly, making them both an expensive and impractical burden for the average kitchen.

Joseph Rosefield solved this problem in the 1920s when he patented a process for hydrogenating the peanut oils to prevent them from separating from the peanut solids which, conveniently, kept the product fresher for longer. Rosefield’s brand, , began hit supermarket shelves alongside other conventional peanut butter brands like Peter Pan in the 20s and 30s, an opportune time for many American families looking for a cheap and high-protein alternative to meat during the Great Depression.

The U.S. Military also added peanut butter to its ration’s menu and, by World War II, both peanut butter and jelly were staples for American soldiers deployed overseas. They enjoyed the two spreads together and, once again, brought the demand for the combination back home after the war. In fact, it wasn’t until PB&J gained popularity with the U.S. Military in the 40s that advertisements for the duo began to appear in stores and restaurants across the country, solidifying the sandwiches as an American lunchtime staple.

Innovation of the beloved combo continues today with products like specialized double-ended PB&J spreaders that eliminate the fear of cross contaminated jars. Alternatively, Smucker’s appealed to those looking to save shelf space by launching Goober, a product that combines vertical stripes of both peanut butter and jelly in a single jar. Chefs have expanded the pair far past the customary Wonder Bread, as well, crafting indulgent peanut butter and jelly hamburgers, cakes, and even cocktails. The flavor combo has now spread into other fields like greeting cards and jewelry and the cosmetic company Too Faced even released a limited addition PB&J-inspired eyeshadow palette in 2016.

No matter what PB&J inventions are on the horizon, the sandwich will surely stay true to its humble beginnings by keeping the U.S. Military well-fed and giving them a taste of home regardless of where in the world they’re stationed.

3 Ways to Get Kids to Skip the Junk Food

5 Healthy Treats (& More!) to Fill Up Your Kids’ Easter Baskets