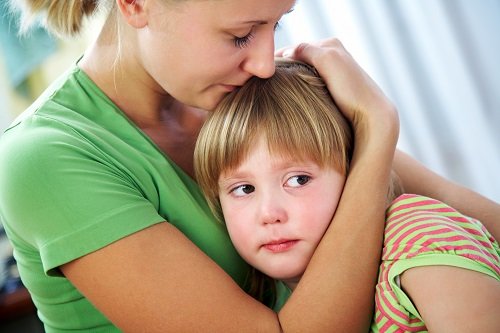 Ever been called fat? Ever call someone else fat? Recently, our guest blogger Vicki DeLuzio had to confront the issue in her family when one of her little ones started using the word. See how she reacted and how she and her family are coping with it, below.

Probably not the “f” word you are thinking of, but one that is equally as upsetting, if not more, in my book.

As we were headed to soccer, she climbed into her car seat and said “You know Eve? She’s on my team and called me fat. I am fat.”

I turned around and looked at my daughter, trying to figure out what to say. Her friend Eve is taller and a bit sturdier than her, but I wouldn’t call her fat either. I paused and said “Do you think she said ‘You are fast?’”

My daughter sighed and said, “Maybe mommy, maybe she said fast.” She sat quietly for a few minutes and then started to sing a song, so I let it go.

Giggles, my almost-five-year-old is very tall for her age. When she was a baby, she had a lot of chunk to her, and people called her fat sometimes. I didn’t really like that, but I would say her rolls were cute. And, she was. She was a very huggable, squishable cute baby. From the very day she was born, she was in the 90th percentile for height and weight, so I was never really concerned. Compared to her older brother, she is much bigger than he is.

Unfortunately, the “f” word kept coming around. My daughter in the bath grabbed her stomach and said, “Ew, mommy, look at this fat!” Again, I tried to not make a big deal of it, and said “Well, when you stand up all the pieces fall into the right places. You are a strong girl!”

She is a really strong girl. She climbs just as fast as her brother and pedals her bike, runs and swims and does activities a healthy almost-five-year-old should be doing. I am not sure where she is getting the obsession with “being fat”.

Yesterday, we were playing at our fourth park of the day, and a little girl was playing with Giggles at the park. Giggles and the little girl were playing pretty well, but the smaller girl couldn’t keep up. Unfortunately, this girl was extremely overweight for her age. I kept an eye on the situation because I was wondering what Giggles would say to her. Later at dinner, Giggles told her dad about her day at the park and said, “I was playing with this one little girl and she was SO FAT.”

So, my husband said very nicely, but immediately, “Was she nice? Did you have fun playing with her?”

And Giggles replied, “Yes, she was nice. But she couldn’t play much.”

So, where does that leave my conversation with my four year old?

At first, I wanted to ignore that she was saying she was overweight or “fat”. I wanted to tell her, “No, you aren’t fat, you are cute the way you are.” Her self-esteem is very important to me, and we eat so healthy in our household with very little variance of bad food, but I thought to myself… she’s seeing things out in her world that we have to address by talking with her about nutrition and continuing to provide healthy snacks. Explaining the healthy snacks, where food comes from and how our body uses it. And continuing to provide times to exercise and enjoy moving.

Our family is extremely active and we hope that it is something we can instill into our kids’ values now while they are young. And hopefully the “f” word can be used to explain the content of the food instead of the value of the person.

Vicki is a mom of three kids seven and under. After graduating college in Connecticut with a major in Psychology and minors in Early Childhood Education and Communication, she tried her hand at retail management at Target. Then, while working at the Juvenile Court, she met her web designing (and Army Vet) husband through mutual friends. Wanting a change of pace, cheaper taxes and warmer temperatures, they sold their home and relocated across the country in Surprise, Arizona. Vicki now blogs about all the places they go with reviews about the amenities in Surprise. She is also a licensed Real Estate Agent and loves helping people find homes in the area. You can find her at www.surpriseazmom.com.