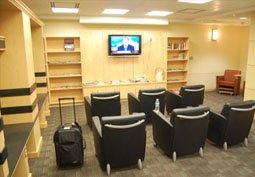 The military itself has a program set up called Space Available Flight, or Space A. Under this program, active military members, retirees and families (sponsored by the service member) can fly on Department of Defense aircraft with empty seats – that is, after all persons with orders have a seat. The pros of this are that you’ll get cheap tickets (Space A doesn’t post the cost of a seat, but it’s significantly discounted compared to a regular flight, and sometimes even free). The cons are that the aircraft won’t know how many (if any) seats are available on a particular flight until as close as two hours before departure, and that if the flight has a layover and picks up more passengers, nonessential people might be asked to vacate their seats.

If you’re not in a rush, you’re flexible and you can handle the unpredictability, Space A is a great way for military members (past and present) and their families to travel on the cheap.

If you don’t want to use Space A, many civilian airlines offer special benefits to military personnel as well. Companies like American Airlines, Delta, Frontier Airlines, Southwest Airlines, United Airlines and US Airways offer discounted military rates. In some cases, military dependents are also eligible for the special rates (Southwest, United and US Airways will sometimes allow this). Many of these airlines also offer free checked bags or wave overweight fees for military members.

Military service members are also entitled to use priority lanes at TSA checkpoints and at the gate. A military Common Access Card (CAC) can give access to TSA pre-check security lanes for at least ten airports around the country (including Washington Dulles International, Ronald Regan Washington National, Baltimore/Washington International, and others), which usually provides shorter waits and less hassles like removing shoes and belts. About 97 airports in the States have a pre-check option, and if they don’t yet accept the CAC card, TSA agents will sometimes send military members and their families through the first class security line, shortening the wait.

Military members are also entitled to free access to United Service Organizations (USO) centers at over 160 locations throughout the U.S. and 13 other countries, including Guam, Italy, German, Japan, Korea and throughout the Middle East. These centers are like airport lounges, and usually have comfortable seating, food and drink options (sometimes free), wi-fi, TV, video games, and more. Sometimes they’ll even have areas for kids with toys and books.

For airports that don’t have USO centers, American Express Platinum users get access to most regular airport lounges. The initial fee for an Amex Platinum card is $450, and fees for subsequent years is $175 annually, but military members don’t have to pay these – they just need a good credit score. In addition to free access to lounges, Amex Platinum also gets you $200 off of yearly airline fees, and lets you bring a guest to the lounge with you.

Military members also have perks when it comes to accommodations. Many hotels (including big chains like Hilton Hotels, Best Western, and others) offer discounts for service members and their families. The military also offers inexpensive lodging at bases around the world, complete with pools, sports facilities, recreation centers and movie theaters. Sometimes, military members are able to access other military-owned attractions, such as beaches, and campgrounds, among other things.

There are many companies who want to show thanks to the people who defend their country. Big-name businesses like Apple, Nike, Lowes, and many others offer discounts for members of the military. If you work to protect our country, feel free to ask for a helping hand anywhere you go – chances are your holiday travels will be easier because of it.

Learn about travel opportunities for Military Families on SpouseLink.

AAFMAA Mortgage: 5 Tips to Make Your Next PCS Move Easier

10 Things Your Military Family Will Love About Fort Drum, NY