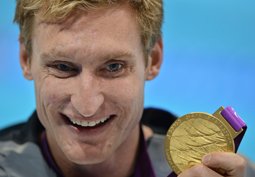 (CBS News) After just one year of training, Bradley Snyder can now call himself a Paralympic swimming champion. But perhaps more impressive than his compressed training period is the fact that just one year ago to the day, Snyder was on the ground in Afghanistan as part of the U.S. military effort in the country.

A 28-year-old Navy Lieutenant, Snyder clearly remembers the blast that robbed him of his vision.

“I remember the actual blast itself, I remember waking up on the ground,” he told CBS News correspondent Mark Phillips.

When he came to, he had some vision in his left eye, but said “shortly thereafter, it went away.”

“[I’m] still looking for it,” he joked in a report that aired Friday on “CBS This Morning.”

Within five weeks of the explosion, Snyder — who was on the Naval Academy swim team at Annapolis — was back in the pool. And despite his quick ascent to the the top of the sport, Snyder said he got back in the pool simply to prove his well-being to his loved ones and prove his own worth to himself.

“It started as just a friendly, ‘Oh, let’s show my family and friends that I’m okay,’ show everyone that I can go and still do the things I used to enjoy … So, hopping in the pool felt very organic, very natural, saying ‘Hey, you’re actually still good at something’, you know, and that was an amazing experience,” Snyder explained.

Soon, he found that training and competing in the pool allowed him to tap into new stores of confidence and self-esteem.

“To be able to hop into the pool and experience success on the level that I’ve experience here at the Paralympics just gives me an immense amount of confidence moving forward into life.”

Friday, a year after losing his sight in the blast, Snyder competed in his favorite event, the 400-meter freestyle. And, unsurprisingly, he finished a full 30 seconds before all of his competitors.