Behind the Blue: Parenting an Autistic Child 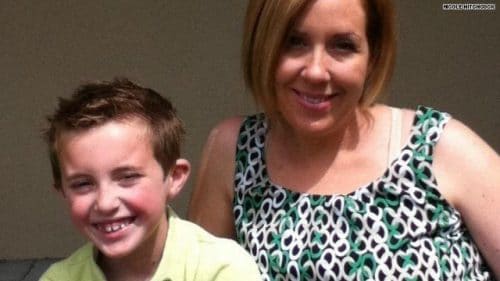 It’s a battle that’s made her stronger. Nicole Hitchcock says her autistic son enriches her as a mother – and as a person. “I feel like I’m a much better human being because this was put in my life,” the 36-year-old says.

But she didn’t always feel that way.  After her son Ramsey’s autism diagnosis when he was two years old, Hitchcock says she cried non-stop — for six months.

“You go through a grief process,” she says.  “It’s very similar to a death.” Dealing with denial, anger and fear, Hitchcock says she didn’t know where to turn when she first found out her son had special needs.

She’s come a long way over the past six years.  So has Ramsey. Now eight years old, he is starting to write his own name.  He is considered high-functioning. He excels in math, and loves Harry Potter.

Recently, he learned how to use the toilet.  “Myself and my husband are ecstatic,” Hitchcock says,  “because that (his inability to use the toilet) was a huge limitation for him, and for our family.”

Ramsey will mark another milestone when he starts playing team sports.  This year, Ramsey will play baseball in the Challenger Division of Little League, which caters to children with special needs.

He thrives with the one-to-one attention he gets in his specialized private school.

But that doesn’t mean caring for Ramsey is easy – far from it.  “Everything is a battle with him,” Hitchcock says.  She and her husband, James Davey, 44, work closely together to get Ramsey ready for school.

They tag team in the morning.  One gets the shower going; the other one gets him undressed; the other gets his lunch ready; and so on.  The process of getting Ramsey from his bed, through the shower, and out the door takes about two hours.

Hitchcock notes that the stress of caring for an autistic child can be a strain on some couples. “I’m really really lucky that I’m still married,” she says.

With her husband’s support, Hitchcock found that as she grew to understand the condition, she embraced it.  The experience has been completely different from what she thought parenting would be.  But she calls it beautiful.

“In the last six years, I’ve come to absolutely love people that are autistic,” Hitchcock says. “I love the way their brains work.”  She loves their literalness.

Now, she finds that opening up about Ramsey has helped her relish her role as the parent of an autistic son.  She is throwing herself into researching how his family can best support him – and into building awareness about autism.

Hitchcock partnered with the managers of the Vintage Oaks shopping center in Novato, Northern California, where she runs the NH2 Salon, to display blue lights in honor of World Autism Awareness Day on Tuesday.

To Hitchcock, the Light It Up Blue campaign means more than raising awareness. “It means love,” she says.  “Light It Up Blue, or blue lights, just represents showing love for special people.”

More on this topic: