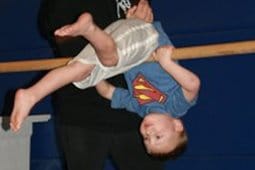 The strength of children can be awe-inspiring, but the strength of Military children comes from somewhere deeper inside. Three-year-old Colton battled a rare form of cancer for more than half his short life. He had a 50% chance of making it to his second birthday and only a slim 5% of making it to his third. Here is the story from Andrea Sutherland (Fort Carson, CO) at Army.mil:

Colton Taylor doesn’t know how special he is. The rambunctious 3-year-old is more interested in swinging from the bar at his gymnastics facility, talking about his favorite super hero, Astro Boy, and eating his afternoon snack of Cocoa Puffs.

He doesn’t remember that a massive tumor threatened his life or that 10 days after his sister, Keagan, was born surgeons removed 78 percent of his liver. Only the scars that stretch across his chest and belly serve as a reminder.

This summer, Colton turns 4 and he’s already starting to forget his two-year battle with hepatoblastoma, a rare form of cancer that causes tumors to form in the liver.

“I beat it,” he said, shrugging his shoulders.

For Colton’s parents, Sgt. 1st Class Scott Taylor and Jennifer Taylor, the memories of hearing their son’s diagnosis, holding him as he went into shock after blood transfusions and trying to remain positive as he went through round after round of chemotherapy will stay with them as they watch their son grow.

“When he was going through it, you feel so helpless. There’s nothing you can do to ease their pain,” said Scott Taylor, a Soldier with 168th Regiment, Regional Training Institute.

When Colton was 14 months old, his parents noticed he was suffering from numerous high fevers.

“We brought him to the doctor and they found out his blood work was abnormal. Then they found the tumor on his liver,” said Jennifer Taylor, a firefighter paramedic with the Directorate of Emergency Services.

“He was stage four,” Jennifer Taylor said. “I thought my baby was going to die.”

Scott Taylor said his son braved the treatments, which included 21 rounds of chemotherapy to shrink the tumors and four surgeries to remove them completely.

“He took it like a champ,” he said. “He thought it was normal. He would smile.”

The Taylors said they had to remain positive for their son despite their own feelings of helplessness.

“They feed off of your emotions,” Scott Taylor said. “He had a port in his chest where they would stick a (one-inch) needle and we just kept saying, ‘That wasn’t so bad.’ ”

The Taylors credit family and friends for supporting them through their ordeal, but they are also grateful to their employers.

Jennifer Taylor said she just began working at Fort Carson when her son was diagnosed.

“People donated their leave to me so I wouldn’t miss a paycheck,” she said. “I didn’t even know their names yet. They came and visited him in the hospital and they told me, ‘You’re family.’ ”

“There’s no way a parent would be able to go through this by themselves,” said Scott Taylor. “We were lucky to have the support.”

Now, 10 months into his remission, Colton is giving back by shaving his hair–the little that’s grown back–for the St. Baldrick’s Foundation, an organization that funds research to find cures for childhood cancers.

“We asked him if he wanted to shave his head and he said, ‘Yes,’ ” Scott Taylor said.

Colton said he wants to shave his head to help his friends.

“[Cancer] scared me,” he said, remembering a lot of bloody noses in the hospital. “I beat it. It’s not so bad.”