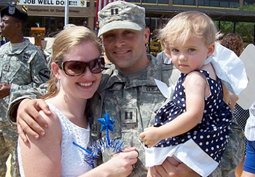 The Rose O’Neill Literary House’s first visitor for the spring semester of Writing in Wartime may not be a soldier who fought overseas, but she is nevertheless fighting a battle of her own. Siobhan Fallon is the author of “You Know When the Men are Gone,” which was listed as a Best Book of 2011 by the San Francisco Chronicle and New York Times. Fallon is also a fiction writer for “Military Spouse” Magazine, and her other works appear in “Women’s Day,” “Good Housekeeping,” “New Letters,” and “Publisher’s Weekly.”

Her main subject matter is from the viewpoint of soldiers and their spouses. Fallon said, “The idea of American war to me was just as much about the culture as the families who were waiting.”

Director of the Literary House Dr. Jehanne Dubrow introduced Fallon and her novel saying, “In her debut collection of linked short stories, Fallon places us within the closed, suspended world of the army base, Fort Hood, Texas.

Fallon offers up a series of portraits, many of which are defined by absence. We know the men are gone because deployment itself is a felt presence.”

Fallon read from the opening story, from which the novel got its name. She claimed that she identifies most with the protagonist who eavesdrops on her neighbor. She explained, “we [the spouses] are infamous for having really shoddy housing and especially thin walls.”

Fallon’s husband has been deployed a few times and he still has more time to serve before he retires. Fallon said, as a military spouse, “You were always stressed with this idea that even if your soldier was home, he’d be leaving soon enough, and you just didn’t have that stability you thought you did when you first married into the military.”

But Fallon took on a leadership role of her own back at the army base. Her husband became a company commander, and that put Fallon in the position of being the Family Readiness Group (FRG) leader. Whenever family and friends had questions about their soldier, they’d go to Fallon.

Fallon admits she had it tough but she also said, “before we even got married, my husband said he needed a wife who’d be an FRG leader, so I knew what I was getting into.”

She also had some support. For example, when her husband was deployed and their daughter was six months old, the United Service Organization recorded her husband reading a book and sent the audio and book to Fallon to read every day. They do this for many spouses.

Being a military spouse writer herself, Dubrow said, “Any text that addresses the difficulties of military life risks being viewed as unpatriotic.”

Fallon experienced views such as those from people who’ve argued that she talks too much about the “darker side of what goes on during deployment.”

But Fallon said, “I felt as a writer, I had to sort of honor the good and the bad.”
She admits it’s a scary thing, but her husband supported her and helped her edit anything that might have been too much. They went to her husband’s commander who said, “You’re a civilian. You write what you need to write.”

Fallon always loved writing fiction, but she also said, “I liked the distance of telling these stories through fiction.”

Being the FRG leader was hard on Fallon. She said she wished someone would tell her, “It is kind of hard. It’s okay to think this really sucks” and she doesn’t have to always be so happy about it. She’s heard other spouses thank her for letting them know they’re not alone.

Dubrow said, “What I most appreciate about Siobhan Fallon’s work is its honesty but also the fact that it employs craft.”

When people think of war in America, they usually imagine men wearing camouflage and weaponry, but Fallon knows there’s a larger community that’s affected. Some don’t want to admit it, but it’s hard for everyone involved.

Dubrow said, “Siobhan Fallon belongs to this first generation of spouses who have the literary training and education, the ambition and also, of course, the guts to write about military marriages and military families.”