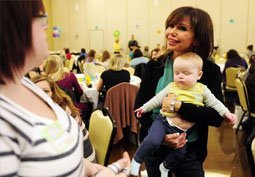 OAK GROVE, Ky. — Baby supplies. Games building bottles, pacifiers and bibs out of Play-Doh. Raffles and prizes. A buffet meal. All the trappings of your typical baby shower.

Only this time, some of the expectant mothers in attendance wore combat boots and fatigues.

Best-selling author Heidi Murkoff and her What to Expect Foundation teamed with the USO to host a shower Tuesday at the Valor Hall Conference Center just outside the Army’s Fort Campbell near the Tennessee-Kentucky border for pregnant soldiers and the spouses of soldiers with new family members on the way.

Many of the 200 or so people who came are far from home, thousands of miles from friends and family — the support network others come to rely upon. The shower gave them a chance to meet new people and ask questions about becoming a mother.

“I just had a baby, and now I’m getting ready to have another,” said Kelley Wendel, 30, who brought her 6-month-old son, Noah, with her to the shower. “I don’t know many people here, and my husband is from North Carolina,” she said as Noah took in the scene from a comfortable perch in her arms. “We don’t have family close by.”

Murkoff has written the “What to Expect” series of guides to pregnancy and the early years of life. Her latest in the series is “What to Expect the Second Year.”

A mother of two, Murkoff said the idea of hosting baby showers first came about when Murkoff was asked to provide books for moms-to-be at Fort Belvoir in Virginia by the wife of that state’s governor. That turned into a shower, which quickly turned into a habit.

But Murkoff wondered how she could help more people.

“What are we going to do next? How are we going to do this on a regular basis? We went to meet with all of the branches of the military,” she said. “We were looking for a partner, and they suggested that we get in touch with the USO, which we did. It was clearly a match made in heaven.

“All we wanted to do was to throw these celebrations for moms.”

Since joining with the United Service Organization, her non-profit foundation has held showers at Fort Carson in Colorado and at a U.S. military base in Okinawa, Japan, in August. Next year, the foundation and the USO plan to host 10 events, six of them overseas.

Murkoff said military moms-to-be and their families face unique struggles. They are often far from home. Spouses can be deployed for long periods of time, and sometimes are gone at crucial moments. The military family, she said, is wonderful and can help.

“But you are always moving,” Murkoff said. “Just as soon as you start to make some of those connections, start to form some bonds, you are moving again. That’s a struggle, especially for first-time moms.”

That was clear for many of those attending Tuesday’s event. Like Zach and Barbie Hazen. He’s from Michigan, and she’s from Illinois. The couple, both 28, met while both were serving in the Army at Fort Campbell.

Jared and Brittany Dennis are expecting their first child next year. He is an Army communications specialist and came to Fort Campbell just six months ago. Both are originally from South Carolina.

Krystal Miraglia, 29, of Fayetteville, N.C., gave birth to her son five weeks ago. Her husband has been on multiple deployments to Iraq or Afghanistan, like most of the other spouses in attendance. His unit deploys again in January.

“I think it is fantastic,” she said of Tuesday’s event. “We don’t have family nearby who can throw a shower for us.”

Murkoff answered questions and signed books. She posed for photos and held the babies — soon-to-be older brothers and sisters — who came with their parents. She said she understands there are a lot of single moms out there. But she said there’s something unique about those in the military or married to a servicemember.

“These are moms who suddenly find themselves without their partners, and for extended periods of time. When they deliver, they may be delivering alone,” she said.