At 92, Hyman Starchman is a Pirate Hero 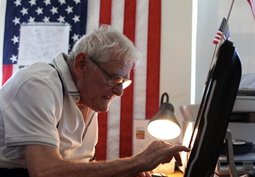 Hyman Stachman, better known as “Big Hy,” is one of the world’s most prolific bootleggers of Hollywood DVDs.

He’s also a 92 year old World War II Veteran trying to stay busy after the death of his wife. He has spent eight years churning out hundreds of thousands of copies of “The Hangover,” “Gran Torino” and other first-run movies from his small Long Island. He has sent almost 4,000 boxes of free DVDs to American soldiers in Iraq and Afghanistan. .

“It’s not the right thing to do, but I did it,” Mr. Strachman said, acknowledging that his actions violate copyright law. “If I were younger,” he added, “maybe I’d be spending time in the hoosegow.”

Capt. Bryan Curran, who recently returned from Afghanistan, estimated that from 2008 to 2010, Mr. Strachman sent more than 2,000 DVDs to his outfits there.

“You’re shocked because your initial image is of some back-alley Eastern European bootlegger — not an old Jewish guy on Long Island,” Captain Curran said. “He would time them with the movie’s release — whenever a new movie was just in theaters, we knew Big Hy would be sending us some. I saw ‘The Transformers’ before it hit the States.”

Jenna Gordon, a specialist in the Army Reserve, said she had handed out even more of Mr. Strachman’s DVDs last year as a medic with the 883rd Medical Company east of Kandahar City, where soldiers would gather for movie nights around personal computers, with mortar blasting in the background. Some knew only that the discs came from some dude named Big Hy; others knew not even that.