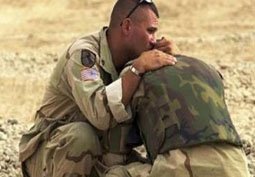 When it comes to preventing suicides, the Army believes it often has enough information about the risk factors that lead up to a soldier taking his or her own life long before the actual event and to intervene beforehand.

The trouble is that the data is not shared between the various Army components and commands that own and maintain it. An IT program the service is just beginning to roll out aims to fix that disconnect.

The idea behind what is now called the Commander’s Risk Reduction Dashboard is not new. It was first proposed three years ago in a report on suicide prevention by the vice chief of staff of the Army. But it’s only begun to finally become a reality within the last few months.

The idea, according to Lt. Gen. Susan Lawrence, the Army’s chief information officer, is to bring together the information the Army already has on individual soldiers and use it to proactively warn their commands that there may be a problem.

In many cases, the Army didn’t know about those risks because the pieces of the risk puzzle are each stored in individual data silos in different Army organizations. In some cases, the data is closely held for good reason in accordance with privacy laws restricting the transferability of data, such as the Health Insurance Portability and Accountability Act (HIPAA).

But the Army believes it will find ways to use those databases as authoritative data sources that feed into the new dashboard while protecting privacy rights at the same time.

That’s one factor limiting the scope of the dashboard for now. However, the Army is already aggregating data from 14 separate authoritative sources to inform the risk information commanders see, and it plans to bring an additional 10 more data systems into the fold in the coming months and years.

“Be it alcohol and substance abuse, medical information, financial problems, military police reports, whatever it is, we’ve got 14 of them tied-in now, and we’re fielding it. We decided we weren’t going to wait for nirvana,” Lawrence told an audience at AFCEA’s recent Army IT Day. “Some of the other 10 are harder, because we’re talking about information protected by HIPAA and civilian law enforcement. But now a commander can look at a soldier virtually.”

That virtual soldier, Lawrence said, tells a commander a story with details he or she didn’t have available before. The dashboard is designed to alert leaders when it spots a conflagration of factors that the military has already identified as risk factors for suicide.

“A brigade commander has 3,000 soldiers, and he can’t be looking at 3,000 files every day. So when something hits a soldier’s file, a flag goes up,” she said. “Then what he sees is, ‘OK, this sergeant has been in the alcohol and substance abuse program before, she lost a child last year and she just had a DUI. I’ve got a high risk soldier here.'”

Armed with that information, commanders can make a range of decisions to protect the soldier, Lawrence said.

“A lot of our soldiers [who are at risk] move to new duty stations, and within the first 90 to 120 days, they take their lives because they don’t have that support base,” she said. “That’s the first thing we can do. When we have a high-risk soldier, we don’t move them. We’re going to help them, and we’re going to do everything we can to support them.”

The risk reduction dashboard has been on the drawing board for several years, even as the Army’s suicide numbers continued to move skyward.

One hundred and eighty-two soldiers took their own lives last year, more than were killed in combat. That’s compared to 159 in 2011. In February, the most recent month for which figures are available, the Army reported 19 potential suicides among active duty soldiers and 13 more among service members in reserve status.

Lawrence said the Army’s senior leadership decided the service couldn’t wait any longer for an information sharing tool that would help them get ahead of the problem.

“We had one contract that came in and said that for $70 million, they could deliver a dashboard within five years. That didn’t help us very much. Another proposal said they could give it to us in two years for $40 million. Then, the vice chief of staff of the Army called me and said, ‘Susan, you’ve got two months to deliver this.’ I said, ‘OK. We can deliver this.'”

Dashboard up and running

Lawrence said it was the Army’s Communications-Electronics command that delivered the capability, putting a pilot program in place within six weeks. The dashboard is now up and running as an interim solution, aggregating data from more than a dozen separate authoritative data sources.

The Army plans to have a permanent version in place within the next two years, and it will warn commanders of potential suicide risks among soldiers in their command on an ongoing basis, but will also let them search for possible risk factors for an individual service member.

And once the privacy concerns are ironed out, Lawrence said the Army hopes to allow all of the data sources to feed into a “virtual soldier” profile that can follow a soldier from one assignment to the next.

“Then, when a soldier moves to a new station, they can see that they’ve got a new soldier coming in. What they see is that I have a high-performing noncommissioned officer, but she lost a baby last year. So we’re going to assign the right sponsor to her once she gets here to make sure she has the support she needs.”