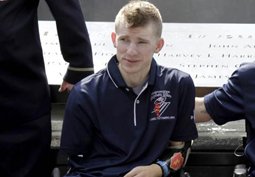 A former soldier who became a quadruple amputee after an explosion in Iraq three years ago has undergone a rare double arm transplant at Johns Hopkins Hospital in Baltimore, the hospital said Monday.

Brendan Marrocco, 26, of Staten Island, who underwent the marathon surgery last month, was the first service member from the wars in Iraq and Afghanistan to survive the loss of four limbs, officials have said.

In a double transplant, four teams of surgeons operate simultaneously — two teams preparing the patient’s arms and the other two preparing the donor limbs.

He lost both legs above the knee, his left arm below the elbow and his right arm above the elbow when a military vehicle he was driving was struck by a powerful makeshift bomb on Easter in 2009.A determined, soft-spoken young man who has endured numerous surgeries, return trips to the hospital and setbacks, he had been waiting for the transplants for years.He got his wish Dec. 18 in a complex, multi-hour operation in which bundles of his muscle, bone, blood vessels, skin and nerves were joined — at times under a microscope — with those of a deceased donor.

Later, in a new anti-rejection procedure, he received an infusion of bone marrow derived from vertebrae taken from the donor’s lower spine.

The surgery was done by a special team of transplant experts headed by W.P. Andrew Lee, professor and chairman of the Department of Plastic and Reconstructive Surgery at the hospital.

It was the first limb transplant by his newly established group at Hopkins, the hospital says.

Lee said results in such cases have been good, although transplanted arms are never going to have 100 percent of the function of the limbs they replace. But he said patients have learned to tie shoes, use chopsticks and put their hair in ponytails.

The hospital said it would provide details of the operation at a news briefing Tuesday.

In an interview, Lee said there have been about 80 arms transplanted in about 60 patients so far around the world.

His team, which until two years ago was based at the University of Pittsburgh, has transplanted 10 arms in six patients, which is about half the U.S. cases, he said.

Marrocco was at the old Walter Reed for several years, and two other quadruple amputees are recovering at the new site.

Most such patients have been fitted with — and mastered — sophisticated mechanical prostheses. But Lee said in a recent interview that research has suggested younger amputees don’t always use them.

“The nonacceptance rate of prosthetics is highest among young people in their 20s and 30s,” he said.

So the possibility of limb transplantation, despite its enormous medical, psychological and logistical complexity, holds great promise, he said.

Aside from the physical outcome, “I think it also has additional advantage for the patient to be restored whole,” the doctor said. “Once they’re transplanted, they regard the arm as theirs. And I think they’re more comfortable going out on social occasions, as opposed to wearing a prosthetic.”

Marrocco, a fair-skinned young man with a shock of light-colored hair, has not spoken widely about the operation.

After recovering at Walter Reed, he returned to Staten Island, where a special home was reportedly constructed for him by charitable organizations.

On Dec. 16, a Twitter posting, which appeared to be his, announced: “Holy mother of god I was just told I might be having my transplant tomorrow!”

A later tweet said: “Wow what a day. I’ll be going to Baltimore tomorrow morning for pre-op and having my transplant tuesday!!!”

Lee, speaking generally and not about the specifics of Marrocco’s case, said the operation requires four surgical teams — two to prepare the donor’s arms and two for the recipient’s arms. Each team has three surgeons.

Little thus far is publicly known about Marrocco’s donor, but Lee said the donor arms often are brought from another hospital, another city or even another state.

Donor and recipient do not necessarily have to be of the same gender — about two years ago, at a California hospital, a female recipient successfully received a transplanted hand from a male donor, Lee said. But the limbs should match in size, skin color, tissue and blood type.

In a double transplant, all four arms must be carefully readied, with the skin peeled back and the bone ends often cut at angle, as a good carpenter might, to promote a solid connection, according to a textbook on transplantation Lee and his colleagues have prepared.

Inside the arms, individual muscle-tendon units, nerves and blood vessels are identified. They are then tagged with pieces of light blue sterile bandage that are sewn in place and labeled in permanent black marker to ensure proper connection.

The connecting sequence begins with the bones, which are joined with metal plates. “It’s not as easy as fixing a fracture,” Lee said, “because the two ends of the bone belong to different people. ”

Next, he said, “we typically connect the muscles and tendons.”

After that, “we put together the blood vessels,” he said. “That’s the critical part, where we need to restore circulation to the transplanted limb by connecting the arteries and the veins. And they’re typically done under a microscope.”

Finally, the skin is sewn together.

That is more problematic for transplants, in part because nerves in the donor arm are dead and must be replaced by the recipient’s nerves, which regenerate down the arm at the rate of about an inch a month.

Rejection and especially the drugs used to combat it pose other problems.

Unlike with organ transplants, “we’re not saving somebody’s life,” Lee said. “We’re improving the quality of life.” So the impact of the anti-rejection drugs is a serious consideration.

He said experts must use care in approaching donors’ families about arm transplants, even if they have agreed to organ transplants.

“We typically relay through [the organ-procurement organization] the story of the recipient,” he said. “What led to the loss of their hand. How much a new hand or hands can mean for that patient.

“For that reason, I think, we were very rarely turned down by the grieving family,” he said.