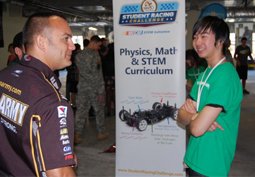 WASHINGTON  — Today’s Soldiers are strong and technologically savvy, and the Army aims to continue to attract these young people to its ranks, said Deputy Assistant Secretary of the Army for Marketing Mark S. Davis.

The Army also wants to educate the public about the many opportunities it offers young people who want careers in science and technology, said Davis, who also is the director of Army Marketing and Research Group, or AM&RG, which was created in April 2011.

“The more we expose the public to our Soldiers, civilians and family members, the stronger our brand becomes, the more our story is understood and believed, and the more comfortable influencers and potential prospects are in recommending or serving in our ranks,” Davis said.

One AM&RG initiative, started a year ago, involves science, technology, engineering and mathematics, or STEM, activities and competitions in high schools across the country.

“We’re trying to reformulate the public’s image of the Army by demonstrating that the Army is a top choice for smart kids and there are many technology opportunities for them,” said Terri Stripling, president of Ten80 Education.

Stripling’s company works with the Army to organize STEM activities in schools across the country, “which collaborate, create and compete with one another.

“We kick off the program at each region with a big event that’s like a high-tech science fair, coupled with a fast-paced, exciting NASCAR or NHRA race,” she said. “Students and educators get to experience the Army’s technology and varied career options via an Army static display, helicopter, vehicles, equipment, field hospital, things like that,” she said.

“Then each school receives a STEM curriculum to learn the basics and problem solving, engineering and design and a range of projects that span a wide variety of interests,” she continued. “Finally, a competition is held at the end of the school year to determine the regional and national winners in each category and overall.”

Regions that have participated include Boston, Chicago, Detroit, Los Angeles, Atlanta, and Phoenix.

Recruiters deliver the projects and curriculum to each school.

“This is a great way for recruiters to gain access to the high schools and generate leads,” she said, adding that they spend a lot of time with the students and teachers, providing inspirational role models.

Projects involve such technology as robots, remote-controlled cars or helicopters, for example. The curriculum that goes with each project, she said, explores how the systems are designed and provides ideas for ways to improve them.

For example, students with an R/C car “study the suspension system, design the car body and even learn how to develop an autonomous driving system,” she said. “Then, they have racing competitions with other schools in the region.”

Each school tailors the STEM project to its own requirements, she said. For example, one school might host the entire project in the science class. The ideal way ahead, however, would be for the school to develop a cross-discipline approach, she said.

For instance, the engineering, math, and science departments would collaborate on the project, she said. They might even include the economics class to develop a marketing plan and a way to raise capital for their fictitious company.

“The entire project is team-based, and this fits in well with the ‘Army Strong’ message of the Army being one team with individuals taking the initiative,” she said.

Schools are also encouraged to partner with local businesses and universities to get assistance with their projects, she said.

The entire program is a win-win for the schools, the public and the Army, she said.