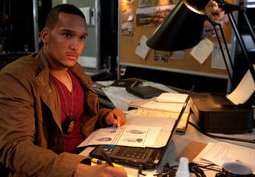 United States Army Reserve Sergeant Mason A. Norman never thought he would end up where he is today. Not only did he get to live out a dream of going to his first live WrestleMania in Miami, he auditioned for the WWE Studios release “The Marine: Homefront,” starring WWE superstar The Miz.

And he got the part.

“Words can’t really describe it,” he said. “Being a [WWE] fan and just having this opportunity to sit down with one of the [WWE] superstars and actually partake, participate in their product is an amazing feeling. I’m going to cherish this forever.”

“This has been amazing,” he said on set. “WWE sent a town car to my house and flew me out to the set and put me up at the same hotel and gave me the same treatment as everyone else [in the movie].

“The Miz is even getting a little jealous of me. I have my own cameraman following me, and my camera is bigger than his.”

When Norman learned he was cast for the movie, the first person he told was his mom, who raised him as a single parent.