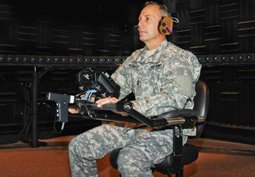 ABERDEEN PROVING GROUND, Md. — The U.S. Army is evaluating commercial-off-the-shelf options for a new hearing-protection system that will provide Soldiers with the situational awareness to increase mission effectiveness and the safety and survivability they need, officials said.

Capt. Randy Shields, assistant product manager for the Tactical Communication and Protective System, said the goal is preventing hearing injury while allowing Soldiers to remain cognizant of their environment during combat.

“Providing Soldiers with TCAPS tells them that the Army has heard what they want: hearing protectors that actually help Soldiers shoot, move and communicate,” Grantham said.

The systems being evaluated also have the potential to save millions of dollars by reducing hearing injuries and post-service disabilities.

According to a General Accounting Office report in fiscal year 2009, hearing-related impairments were among the most common for veterans receiving disability benefits.

Annual payments for hearing impairment exceeded $1.1 billion, and the Department of Veterans Affairs purchased 382,000 assistive hearing devices for about $154 million in fiscal year 2008.

The TCAPS materiel solution has not been selected, Shields said.

Shields said informing Soldiers about the importance of wearing the improved hearing protection will be critical. Soldiers need to understand the negative consequences of not using the protection.

Grantham noted that Soldiers understand they need to protect their hearing but choose not to wear protectors because of perceived limitations.

Shields agreed that this is the current perception.

“The biggest hurdle is to get user acceptance,” Shields said. “Up to this point, we haven’t had a capability that we put in an operational environment where Soldiers can truly believe that if they have these in their ears, they still can hear what’s going on, feel safe and do their job.

“With ear plugs, your ears are protected, but it’s a choice — either force protection or ear protection.”

Grantham said the Army is working to change that belief among Soldiers.

“Providing TCAPS, plus training in operational environments early in a Soldier’s career, will lead to trust in the capabilities these systems offer with hearing-critical, mission-essential tasks,” Grantham said.

Operational testing will begin in February or March 2013.

Shields said the system will be focused on dismounted Infantry Soldiers. The Maneuver Center of Excellence has identified wireless technology as an objective requirement.

“The Soldier needs situational awareness. The end state is having a device that can integrate with the total system the Soldier has on him,” Shields said. “Evolving toward wireless will be the best end state for the Soldier — that way he can integrate into a total Soldier system.”

A final decision on the product is expected in spring 2013 with fielding to Soldiers in 2014, Shields said.