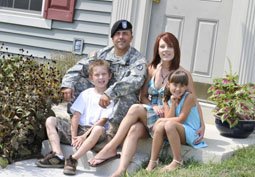 WASHINGTON (Army News Service, April 17, 2013) — Beginning Aug. 1, 2013, every Soldier who elects to transfer their Post-9/11 GI Bill benefits to a family member will incur an additional four years in the Army, without regard to their time in service.

“This policy was drafted in 2009 and takes effect Aug. 1, 2013. It is important that we inform Soldiers of this existing policy regarding the Post 9/11 GI Bill benefits,” said Lt. Col. Mark Viney, chief of the Enlisted Professional Development Branch, Army G-1.

That news comes in a message to military personnel, dated April 15, 2013.

The rule largely affects senior officers and enlisted Soldiers who are retirement-eligible. As of now, these Soldiers may be able to transfer benefits to their loved ones with anywhere from zero to three years of additional service.

Soldiers who are not retirement eligible, electing to transfer their GI Bill benefits to a family member means re-upping for an additional four years.

Come Aug. 1, that rule will apply to all Soldiers, whether they are retirement-eligible or not.

“The Post-9/11 GI Bill. Soldiers are entitled to the benefit for their own use, but to transfer to dependents: that is used as a recruiting and retention tool,” said Lt. Col. Mark Viney, chief of the Enlisted Professional Development Branch, Army G-1.

“We want Soldiers to be informed of the impact of this policy,” Viney said. “This is going to impact their decisions and their families, and whether or not they are going to have this money available to fund their dependent’s education.”

Veterans Affairs, or VA, also has eligibility requirements for transferability. A Soldier must have six years of active duty in order to transfer his GI Bill benefits.

Viney said that as the Army draws down, some Soldiers will be involuntarily separated under force-shaping initiatives. Soldiers who are separated early under such circumstances and who had previously transferred their Post-9/11 GI Bill education benefits to their dependents may retain the transferred benefits, without needing to repay them to the VA.

Soldiers with questions about transferring their Post-9/11 GI Bill education benefits to their dependents should contact their approving official.