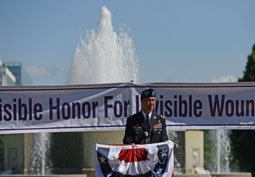 WASHINGTON, June 24, 2013 – Over the last 12 years, many soldiers have returned from Iraq and Afghanistan with wounds, some visible and some not, a leader in Army Medicine said here June 22.

“The invisible wounds — post-traumatic stress disorder and traumatic brain injury — are just as damaging as the visible ones. They impact the families as well as the soldiers,” said Brig. Gen. (Dr.) John M. Cho, deputy chief of staff for operations with Army Medical Command.

An Iraq War veteran himself, Cho spoke outside the U.S. Capitol as part of National Post-Traumatic Stress Disorder Day. This year’s theme was “Visible Honor for Invisible Wounds.”

A big part of that discussion, he said, needs to focus on reducing the stigma associated with mental health issues.

Besides a national discussion, Cho said, agencies both inside and outside the military need to come together to learn more about identifying and treating PTSD and TBI, as well as preventing it in the first place.

Cho said a PTSD diagnosis is particularly challenging, as “you can’t simply get a lab test or take an X-ray to find it.”

As part of its collaborative effort, the Army is participating in a $60 million research study for TBI, sponsored by the National Football League, General Electric and athletic apparel manufacturer Under Armour, he said.

Also, $700 million has been allocated toward both PTSD and TBI as the result of a White House executive order for a renewed effort in collaboration with the Veterans Affairs Department and other organizations.

Additionally, the Army has set up seven “restorative centers” in Afghanistan, where TBI can be identified and treated, often allowing soldiers to stay in theater as they improve, he said.

The general explained that PTSD often, but not always, occurs with TBI, and that relationship, too, is being researched. “We’re nowhere near where we want to be, however, when it comes to researching PTSD and TBI,” he acknowledged. “A lot more needs to be done.”

Cho said PTSD affected him personally when his brother, who also is a U.S. Military Academy graduate, returned from Afghanistan suffering from PTSD. He sought treatment and is better now, he said, adding that his brother is telling his story to other soldiers in an effort to get them to seek care.

“We know treatment helps,” Cho said. “We can help them get better, and they can continue to serve in our Army with honor and distinction.”

As a result of his brother’s experience, Cho said, he’s a big believer in group therapy, particularly cognitive processing psychotherapy.

Army Chief of Staff Gen. Ray Odierno, unable to attend the day’s event, wrote in a letter for the attendees: “PTSD is a combat injury. Veterans suffering from PTSD deserve the same dignity and respect as our fellow wounded warriors.

“With the continued support and encouragement of organizations like Honor for ALL, the Army and this nation have made enormous strides in treating this injury, removing the stigma and instilling dignity in our recovering veterans,” Odierno’s letter continued. “But more work must be done!”

Honor for ALL, a nonprofit organization sponsoring the event, is dedicated to eliminating the stigma of PTSD and supports research into finding the causes and treatment of the disorder.