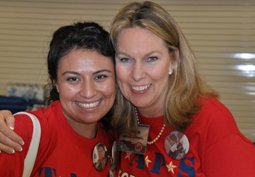 WASHINGTON (Army News Service, Oct. 11, 2012) — After losing her husband in 1992, Bonnie Carroll channeled her grief into a support organization that provides hope and comfort to the surviving families of service members.

“She has changed the lives of thousands of survivors and provided unequaled services for those loved ones left behind,” reads an excerpt from the Outstanding Civilian Service Award which will be presented to Carroll this evening.

Army Chief of Staff Gen. Ray Odierno will present the award to Carroll, founder and president of the Tragedy Assistance Program for Survivors, known as TAPS, during a Twilight Tattoo at Joint Base Myer-Henderson Hall, Va.

TAPS “offers peer-based emotional support to bereaved Army families,” Carroll said, explaining that “peer-based” means “establishing a connection to others who have endured a similar loss.

“There is an understanding that is unspoken between survivors — just knowing someone else has experienced a similar loss gives people comfort and the knowledge that they are not alone. While many people sympathize with survivors of our fallen, few understand, truly, what they are going through. That is something only a peer-based support organization can provide.”

Among the services TAPS provides are: Good Grief Camps and Camp Outs for children; seminars for adults; connections to care providers in communities across America; casualty casework assistance referrals to all federal, state and private-sector agencies; grief and trauma resources and information; a 24/7 National Military Survivor Helpline at 800-959-8277; and a website with useful information at http://www.taps.org.

“It is where children learn that they are not alone in facing the death of a loved one,” she said. “Children meet others who have experienced a loss and build their own peer-based network for support. They do age-appropriate educational activities that help them learn how to cope with their grief, so they have skills to help them after they go home. They also learn how America honors those who have served and died, and how their families are connected to a national legacy of service and sacrifice.”

Children are paired up with a TAPS Good Grief Camp mentor who is trained in how to companion a grieving child, she said, and the companion helps provide a critical connection back to the military family for the child.

This summer, the 7-year-old son of a fallen Soldier attended a TAPS Camp Out — his first TAPS program and first time away from home alone since his dad’s death, she said.

“At the Camp Out, he was paired with a TAPS military mentor, and he made new friends his own age who could understand his loss because they missed their dads, too. This little boy shared his sadness, but also his pride. He found a safe place at TAPS to talk about the feelings he was having and learn coping skills that would sustain him.

In one exercise, the children put their hand on a piece of paper while their military mentor traced the outline of their fingers, Carroll said. Then in each finger they wrote a question they would ask their dad, if they could have him back for a day. This little boy wrote, ‘Why did it happen?’ ‘Why did the bad guy kill him?’ ‘Why did he have to die?’ ‘Was he with his friend?’ and ‘Why was he in the war?’ He also asked, ‘What did you do while you were a Soldier?’ and ‘Why is the war made?’

“These are weighty subjects for a 7-year-old,” Carroll said, “but he was not alone with these thoughts, and in this safe place, he could talk through these tough topics honestly and openly.”

Carroll said TAPS offers hope, healing, comfort and care to thousands of children like this 7-year-old, allowing them to put words to the feelings deep in their hearts. “This little boy ran to his mom when she came to pick him up, and she shared with us later that for the first time, he was smiling again and able to be a kid. This is the miracle TAPS offers.”

(Editor’s note: Others who will be honored at the Twilight Tattoo, beginning at 5 p.m., on Whipple Field are: David Feherty, co-founder of Feherty’s Troops First Foundation; Mike Conklin, with the Sentinels of Freedom; Dr. Edmund C. Tramont, infectious disease specialist, National Institutes of Health; and Steve Dunning, co-director of NBC Universal’s Veterans Network and a member of the Got Your 6 Campaign Steering Committee.)