App a Social Network for Vets 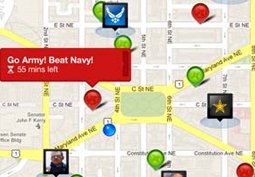 Mourning the loss of his best friend who took his own life, then-Sgt. Jake Wood found something troubling at the memorial service: A group of their buddies who’d left the Marine Corps lived just 15 minutes from one another in the Houston suburbs.

For two years, Sgt. Clay Hunt lived among them, battling post-traumatic stress, isolation and memories of fallen friends. But none of the Marines knew of the others, and no one knew that Hunt’s life teetered on the edge. Then Hunt shot himself on March 31, 2011. He was 28.

Could technology have saved Hunt’s life? Wood and other former service members think it’s possible and have developed a new smartphone application to help veterans find support, whether they’re struggling emotionally, looking for work or just hoping to connect with people who’ve had similar experiences.

That Hunt, a combat veteran with 2nd Battalion, 7th Marines, had struggled seemingly alone gnawed at Wood. At the time, he was living in Los Angeles, where he and a friend, Sgt. William McNulty, founded a disaster relief organization called Team Rubicon.

Just a year earlier, Hunt joined Wood and McNulty on a mission to Chile. Hunt, they said, embraced the team’s camaraderie. But somewhere along the way, he fell into despair. And at the end, he was alone. It was, Wood said, “a tragic failure to connect.”

Wood and McNulty wanted to connect combat vets, especially grunts like them facing high unemployment, a rough transition to civilian life and struggles with combat stress. When they met a former soldier, Spc. Anthony Allman, the idea took shape.

On Nov. 19, they launched POS REP, a proximity-based social network geared toward post-9/11 veterans. Short for Position Report, it’s available with an iOS beta version free through the Apple Store. An Android version is three or four months out, Allman said, and will be available via Google Play.

The plan, he said, is to give vets access to a network of about 50 partners so far, including military and federal agencies such as the Department of Labor, state veterans agencies and vet support organizations.