An Elmo the Day Keeps Apples on the Way 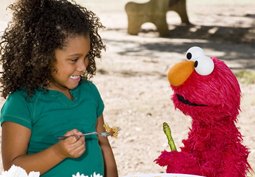 Elmo is the man… err, monster these days! Headlines all across the nation are giving him credit for making apples more appealing.  A new study published this month in the Archives of Pediatrics and Adolescent Medicine conducted by researchers at Cornell University found that children ages 8 to 11 were 65% more likely to add an apple to their lunch in their school cafeteria when Elmo stickers were placed on the apples compared to when the apples had no stickers. Sesame Workshop had no input or knowledge into this study until it came out in the press, but it reconfirms our own and others’ research on the power of beloved characters in influencing food choices and other behaviors.

Since 2005 Sesame Workshop has been committed to an initiative called Healthy Habits for Life in which we promote healthy eating, physical activity and rest and relaxation. At the start of that initiative we brought several child nutrition and health experts in to help craft our messages. We also conducted our own research into children’s perceptions of healthy eating as well as the influence of characters on food choice. In an initial pilot study that was presented at the Society for Research in Child Development in 2005, we found that placing an Elmo sticker on a picture of broccoli increased children’s self reported preference for that broccoli, enough so that it became equal to a piece of chocolate.

In a larger follow up study published online in April in the Journal of Health Communication we found that although stickers of Elmo and other favorite characters did not increase the appeal of healthy foods equal to that of more sugary or salty snacks, we were able to increase the appeal of any food when it contained a sticker of a Sesame Street character compared to a different food without a character or with an unknown character. Moreover, children were more likely to taste pieces of a healthy food when it was labeled with Elmo.

Researchers tell us that it can take around 10-15 times for children to acclimate to an unknown food, especially those that are not naturally sugary. The more strategies that parents and caregivers can use to make those attempts to try new foods more enjoyable, the more likely children may be to persevere.  Decorating plates and cups with stickers of favorite characters, character signage and activities in grocery stores, or arranging vegetables in characters likeness, which we have seen on Pinterest, may be particularly useful ways to encourage healthy eating.

For policy makers and food companies, the accumulation of research on young children, food and branded characters is particularly informative. To ensure that our young children are receiving their daily nutritional needs, we can all be creative about how we recommend and use the characters children trust, respect and love to promote healthy behaviors.