An Aggressive Campaign Against Suicide 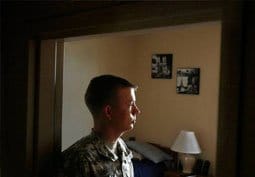 “I’ve done something,” Jeffery mumbled to his buddy. “I can’t tell anyone. It’s going to happen.”

He had just learned his girlfriend was cheating on him. The Army had decided to kick him out for using heroin. Now the 21-year-old veteran of Afghanistan had downed more than two bottles of Vicodin and Oxycodone, powerful prescription painkillers. Boswell rushed him to the emergency room, and he remains in the hospital psychiatric ward.

The case is a success of sorts — a soldier treated, a suicide prevented — and it reflects an encouraging shift at Ft. Bliss, one of the Army’s largest bases, a vast Texas sprawl of 30,000 soldiers and row upon row of armored vehicles brought back from Iraq and Afghanistan.

With a suicide epidemic sweeping the military, commanders at Ft. Bliss have aggressively approached mental health problems, building an early warning system to identify and monitor distressed soldiers, and intervene at the first sign someone is considering suicide.

The goal is to change how the Army handles a mental breakdown, turning it from a silent ordeal borne alone by a soldier, maybe with help from a chaplain or psychiatrist, to a collective mission, in which the base community has responsibility for stopping a potential suicide.

Overall, at least 349 U.S. service members committed suicide last year, the most since the Pentagon began releasing statistics about a decade ago. In comparison, 295 Americans were killed in combat last year in Afghanistan. So far this year, 99 more suicides have been confirmed.

Even for the Army, where soldiers have little privacy, the Ft. Bliss program is intrusive.

Each company-sized unit and above must submit a monthly list of soldiers with known emotional, financial or drug problems. Other soldiers may be assigned to watch those considered high-risk. Ranking officers follow up.

Soldiers are trained to recognize warning signs in themselves and others, and told to inform superiors if they suspect a potential suicide. Mental health counselors have set up offices near brigade headquarters. Troops are tested for drugs up to eight times a year; the Army normally does only one. The hospital doubled the beds in its psychiatric ward to 28 after complaints about long waits for treatment.

The system seems to help. Ft. Bliss saw only five suicides last year, down from seven in 2011. The number of suicides rose sharply at nearly every other major Army base, including Ft. Bragg, Ft. Hood and Ft. Campbell.

“If you get a soldier to treatment, the chances are he’ll live,” said Maj. Gen. Dana Pittard, a West Point graduate who commands Ft. Bliss and once served as President Clinton’s military aide. “We’re really emphasizing getting help.”

Pittard is an unlikely spokesman for aggressive intervention. In January 2012, writing in his official blog, he called suicide “an absolutely selfish act” and urged troubled soldiers to “deal with your real life problems like the rest of us.”

He later retracted the comments. Aides said he was venting after attending a memorial for a soldier who killed himself near his two young daughters on Christmas Day.

The Army, which carried the brunt of deployments to Iraq and Afghanistan, also has borne the most suicides.

For decades, the suicide rate in the Army was less than half the male civilian rate. It began rising as the Army expanded to meet manpower needs for the wars in Iraq and Afghanistan.

Since 2009, more than 22 soldiers per 100,000 have taken their lives, just less than the civilian rate for men. No one is sure whether the increase is due to the mental and physical toll of war, eased recruiting standards or other factors.

Military suicides fit no clear pattern. Most are young males who endured combat, but one-third never did. Some saw comrades mangled or killed, or struggled as marriages or relationships shattered. Some grappled with brain injuries, post-traumatic stress or drug abuse.

Jeffery’s case defies the assumption that combat stress is driving the suicide wave.

His life came apart after he returned to Ft. Bliss in July from a year in Afghanistan. In an interview, he said he started shooting up heroin that he bought in nearby El Paso, resuming a habit he had picked up in Baltimore where, he said, his father died from an overdose and his mother was an addict.

He joined the Army hoping to leave heroin behind. He was deployed to Afghanistan’s Wardak province, where fighting was fierce. Most days he went on long patrols in armored vehicles, getting into battles and clearing roads of buried bombs. Although some exploded, he was not wounded.

“I didn’t feel the need” for drugs, Jeffery said. “Just the adrenaline from taking incoming and going out on convoys was enough for me.”

But back at Ft. Bliss, he missed the excitement and danger of combat. He had trouble sleeping and was nervous. He started shooting up in his barracks. Called for a random drug test last fall, he refused, knowing he would fail, he said.

His refusal normally would trigger an automatic court-martial and possible dismissal from the Army. But Jeffery volunteered for a drug treatment program at the base, earning a reprieve. His commander assigned Boswell, who had befriended Jeffery in Afghanistan, to keep tabs on him.

“He told me multiple times that the only place he felt relevant was in Afghanistan,” Boswell said. “All he talked about was volunteering for the next deployment.”

Jeffery said he found the outpatient drug treatment program — an hour a week of group therapy and periodic sessions with a counselor — unhelpful. He said he warned his commander that he needed a more intensive inpatient program in San Antonio or “you are going to see a dead soldier.”

“I pleaded with them, but they felt I wasn’t motivated enough or I wasn’t going to be successful,” he said.

In late February, after breaking up with his girlfriend and learning that the Army was starting proceedings to discharge him for failing a drug test, Jeffrey took his $300 income tax refund and bought prescription painkillers on the street in El Paso, intending to kill himself.

Boswell’s quick response and hospital doctors saved his life, and Pittard, the base commander, later assembled Boswell’s 150-man company in formation to publicly praise his actions.

No one at the open-air ceremony mentioned Jeffery by name.

“The fact is that I am still an addict,” Jeffery said later, from the hospital. “I still have a problem. Nothing’s changed.”

No one argues that preventing suicides solves the broader problems. Indeed, soldiers at Ft. Bliss talked about killing themselves or someone else, or were admitted to the hospital psychiatric ward, more than 50 times a month on average last year, according to commanders’ reports.

Among those being treated is Sgt. Blanco, who asked his first name not be used. The memory of losing one of his closest friends in a battle with Afghan insurgents haunted him when he returned to Ft. Bliss. He drank heavily and couldn’t sleep.

One night, he broke a bottle and slashed it across his chest. His wife found him bleeding on the bathroom floor. Blanco insisted it was not a suicide attempt, but his wife said she would leave him unless he got help.

He went to the base Warrior Resilience Center, which combines traditional group and individual therapy with techniques such as meditation, yoga, acupuncture, massages and hot-stone therapy.

Blanco was diagnosed with post-traumatic stress disorder and showed symptoms of traumatic brain injury, probably from an earlier combat tour in Iraq. At first he sat silently in group sessions. Ultimately talking about his rage helped, he said, along with drugs to control his moods.

Another Ft. Bliss soldier who defies the stereotype is Spc. Leah Johnson, a 26-year-old intelligence analyst who never served in combat.

No one in the Army knew her secret: Five years before joining, she had been raped by four men. She had told only a girlfriend. She refused to tell police or seek counseling.

“I wanted to pretend like it never happened,” she said, wiping away tears. “At the time I thought that if I could do that, then it would just go away.”

But in 2011, her father, a former Marine, died of cancer. Then two close friends and her girlfriend’s father died. Johnson was overcome by grief.

She stopped talking to other soldiers. Long drives in her prized Jeep on desert roads no longer cleared her head. She began thinking about killing herself.

Noticing her change in behavior, her unit commander assigned Sgt. Jamie Spanski to keep tabs. One day, Spanski texted to ask how she was doing. Johnson replied she was thinking about driving her Jeep into a wall.

She was ordered to report to the emergency room. She sat in the car for nearly an hour. “I kind of felt that nobody knew what I was going through, nobody would understand,” she said.

The base psychiatric ward was full, so Army doctors sent her to a civilian hospital in El Paso. She stayed three weeks, taking antidepressant drugs and getting therapy for the roots of her anguish, including the rape.

Johnson has returned to duty and no longer thinks about killing herself, she says. But her mood can darken quickly. She has panic attacks and recently was found passed out on her barracks floor.

She has reenlisted in the Army for another three years.