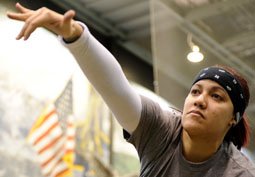 Behind her bright brown eyes, easy smile and contagious laugh there is pain — both physical and mental.

Retired Staff Sgt. Zuleika Cruz-Pereira joined the Army after Sept. 11, 2001, because she wanted to do something to help people.

“I wanted to go out there and do something big,” she said. “I’m one of those people who it doesn’t matter if I know you or not. I’m going to help you if you need help.”

She enlisted as a water treatment specialist and served two tours in Southwest Asia before she joined the Air Force in 2008. During her time in the Army, Cruz-Pereira saw and experienced things that are still too painful for her to share outside of her closest confidants. Despite her battle with post-traumatic stress disorder, which was undiagnosed at the time, she deployed again — this time as a logistics Airman.

Cruz-Pereira was working in a warehouse in Iraq, a job she said she enjoyed, when she was injured. A 75-pound piece of equipment fell off a shelf and pinned her to the floor, crushing her. Cruz had sent her Airmen to lunch and was alone in the warehouse. She picked herself up and continued to work and told no one about the accident, except her husband who was still in the Army and deployed to another location. But she didn’t even tell him the severity of her pain.

“When it happened I didn’t say anything,” she said. “I remember waking up – my head hurt and I touched it and I didn’t see any blood. I moved the box off my stomach and I got back to working. I was in excruciating pain.”

A few weeks after the accident, Cruz-Pereira said she would fall each time she tried to stand and her supervisor began to notice. Her supervisor sent her to the doctor and that’s when Cruz-Pereira discovered just how severe her injury was.

She was diagnosed with a mild traumatic brain injury and cervical, back and sciatica nerve injury and sent to Germany for further treatment.

Cruz-Pereira returned to Fort Riley, Kan., where her husband is stationed, so she could be with him while she endured medical procedures. The doctors there weren’t able to perform the surgery to improve Cruz-Pereira’s condition, and she was eventually medically retired.

With few friends besides her husband, her support system was small and Cruz-Pereira said it became hard to manage the pain, depression and PTSD she endures to this day.

“The Warrior Games is a good thing because it helps me out a lot,” Cruz-Pereia said. “Back at home, with the depression and everything, I don’t really get out of the house.

“(Here), it feels good, it’s like I’m serving again in a different way,” she said. “It’s feels good to wear blue again that says Air Force. It just feels awesome. When I’m here, it fills the void that I have in my heart.”

Cruz-Pereira heard about the Warrior Games and felt like to competition was just what she needed. As a life-long athlete, she thought being back in the company of Airman was something she felt would benefit her.

“Being injured and being in pain, you think you can’t do sports anymore,” she said. “When they told me about the games, it opened a lot of doors and it opened my mind to it.

“When they had the selection camp, I gave 150 percent because I wanted to be on the team so bad,” Cruz-Pereira said. “I wanted to be involved in sports again because that’s me. I wanted to feel like I can be normal again, even if I’m in pain.”

Cruz-Pereira admits she has a long way to go in her recovery, but The Games is something that has helped her see there is light at the end of the tunnel.

“In the September camp I told (one of the coordinators) ‘You know what? You just saved me.'”