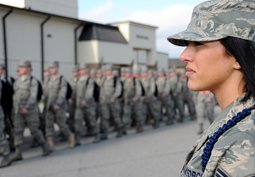 The U.S. Air Force announced Wednesday that it is changing how it selects officers and instructors who train new recruits after a sex scandal at its training headquarters in which dozens of female recruits said they were improperly approached, sexually harassed or raped by male instructors.

Maj. Gen. Margaret Woodward, who investigated the Air Education and Training Command, said the biggest failure came from bad instructors who took advantage of a weak oversight system and the officers who did not adequately supervise them to catch the abuses.

“Interviews revealed that some (instructors) lacked the experience necessary to effectively serve as mentors and leaders and had little to no supervisory experience,” the investigation concluded. “This lack of experience is considered particularly relevant when a single (instructor) is generally responsible for a flight of 50 or more trainees.”

The investigation found that 23 instructors allegedly engaged in inappropriate or coercive sexual relationships with 48 recruits at Lackland Air Force base near San Antonio. Five people have been convicted in court martials on charges ranging from adultery to rape. Another person received administrative punishment, and additional instructors still could face criminal charges.

All U.S. airmen report to Lackland for basic training. It has about 500 instructors for about 35,000 airmen who graduate every year. While one in five recruits are women, most instructors are men.

In a written response to the investigation, the commander in charge of training, Gen. Edward Rice Jr., said the Air Force will add more and better officers to supervise training units and require enlisted troops who hold instructor jobs to have more seniority. Instructors will also be expected to monitor each other to look for signs that abuse is taking place and the Air Forces plans to recruit one female instructor for every three males.

“The susceptibility to the abuse of power is well-documented, not just here but in any situation of its type. And we believe we can do more to both equip each individual with the sort of warning signals they should be looking out for among their fellow airmen and taking ownership of the responsibility to monitor not just their own behavior, but also those around them in a way that when someone doesn’t meet our standards, they intervene early,” Rice said at a news conference in Washington.

Rice also announced a new Military Training Oversight Council to make sure reforms are implemented and maintained. The Air Force will also provide additional training for trainees and instructors on sexual assault and inappropriate relationships within the military.

Protect Our Defenders, an advocacy group for military personnel who have been sexually assaulted, welcomed the report, but called for congressional action in addition to the reforms announced Wednesday.

“The reforms proposed will not fix the systemic cultural and legal biases that preclude justice for victims of military sexual assault,” said Nancy Parrish, president of the group. “And the issues confronting the challenges of reporting a rape or assault need more examination.”

Woodward made 46 recommendations for how to improve Air Force basic training to prevent future abuse. Rice said the command has already instituted 13 and is on track to implement all but one by August 2013.

“Sexual attraction, power, and money are three of the most corruptive elements of the human condition, and two of these three are present in the basic military training environment,” Rice wrote in a letter to the secretary of Air Force released Wednesday. “If we do not take steps to address these corruptive elements persistently and positively, we will find ourselves in the same situation at some point down the road.”