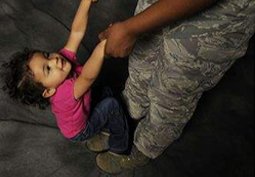 Aspiring airmen who are single parents or the spouses of military service members will be able to join the Air Force under a policy change announced Wednesday.

“It’s important for us to attract the highest caliber men and women to serve in today’s Air Force,” said Brig. Gen. Gina Grosso, director of force management policy. “These policy changes open our doors to more individuals who are highly qualified, but whose family obligations would have previously disqualified them.”

The Air Force will now allow single parents and parents with military spouses, who have up to three children, to enter officer training school, as long as they have an approved care plan for their children. All applicants who have one or two children — but not more — under the age of 18 who cannot care for themselves also will be able to enlist with an approved child care plan.

The Air Force also is changing its pregnancy policy for Officer Training School and Military Training School. Trainees will now be allowed to return to their programs after pregnancy upon receiving medical clearance. ROTC cadets can be commissioned and proceed to follow-on training once they are cleared to do so by a medical authority, the Air Force said.

Air Force spokeswoman Laurel Tingley said the case of Rebecca Edmonds, an aspiring nurse who was kicked out of the Air Force in 2011 when she became pregnant before being commissioned as an officer, prompted the service to re-examine its rules.

Edmonds discovered she was pregnant in March 2011, a few weeks before her graduation, her attorney, Daniel Conway, said. She was commissioned that July and reported to her nursing transition orientation program, where she reported her pregnancy. Soon afterward, Air Force ROTC began investigating her, concluded she was fraudulently commissioned, and summarily discharged her as an airman basic. The Air Force also billed her about $90,000 for her scholarship.

Conway said that Edmonds appealed her dismissal, but because single parents were disqualified from service, her appeal was denied.

Conway expects the Air Force Board for Correction of Military Records will hand down a final decision in Edmonds’ case within the next week or two. If the board rules for Edmonds and if she is able, Conway said she hopes to re-join the Air Force as an officer.

“She’s a very patriotic young woman who loves her country,” Conway said. “She comes from a military family, and had dreams of serving. Hopefully, we’ll get a decision that puts her in that position.”

Since being dismissed from the Air Force, Edmonds has been working as a private-sector nurse in the Milwaukee area and raising her son, Conway said.

Conway applauded the Air Force for changing their policies on single parents.

“Good for the Air Force,” he said. “I think this is going to be a good change, and hopefully it will lead to a better, more professional, more efficient Air Force.”

But Tingley also said the decision will have broad implications across the Air Force.

“Creating a family-friendly, female-friendly atmosphere in which all airmen have equal opportunities to succeed and serve is important at all levels in the Air Force,” Tingley said. “Changing these policies is one more step to ensure such an atmosphere exists from an airman’s first day of service.”

The Air Force said it made the changes after officials realized pregnancy policies for airmen were not being applied equally across the service.

“We discovered that the language in our pregnancy policy was too ambiguously written and could be interpreted in multiple ways,” said Tina Strickland, chief of Air Force accessions and training division. “We wanted to make sure the policy was being applied consistently across the Air Force. Reviewing the policy also drove us to examine our other rules for airmen entering the Air Force with families.”