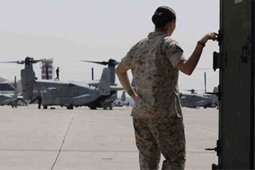 At 21, Lesley Reed met her handsome Sergeant, Jimmy Fordyce, through her Marine brother. They had only been together 6 months when Fordyce left for his third overseas tour. He planned for this to be the last deployment–he would quit the service, they’d move to Philadelphia, he’d get a job, and she’d go back to school.

He was killed in a  helicopter crash off the Horn of Africa in 2006.

“I didn’t have any reason to get up in the morning,” Reed said. “I had no reason to live anymore. There was nothing for me to do.”

After a loved one dies, everyone must find a way to cope. Reed immersed herself in Fordyce’s memory–by joining the Marines herself.