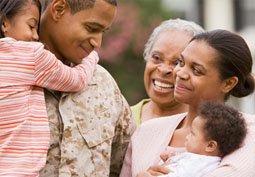 Whenever the subject of military deployment comes up, the focus is almost always on what happens when a family member departs.  There are worries about safety, loneliness and the pain of separation.  As the return date nears, families breathe a sign of relief and count the days to the happy homecoming.  Unfortunately, they may soon discover that, for the returning soldier, leaving the battlefield doesn’t necessarily mean leaving the war behind.  The homecoming is not the happy ending they expected.  Instead it can signal the beginning of a new chapter often fraught with disappointment and tension.

“The challenges facing the returning vets and families are no less severe than those faced in a combat zone because everyone has changed and the balance of the family has shifted,” says Dr. Judith Broder, a therapist and founder of The Soldiers Project.  “The veteran has changed because of what he or she has seen and done.  The family has changed because they’ve made an accommodation in their absence.”

Navy Reserve Capt. Kristen Guarnieri agrees.  When Guarnieri was activated for stateside duty for a year, she left behind a husband and two young children.  “When I came home, the adjustment was very hard because I had to figure out where I fit in,” she recalls.  “My husband was used to doing things his way and I was used to coming and going as I pleased.  Sometimes the kids would ask for their dad instead of me and that would crush me.  It probably took us a good 8 to 12 months, along with a lot of work and compromise, to navigate those waters.”

The return can be surprising and sometimes painfully disappointing to military families but these steps will help make the readjustment as serene and stress-free as possible.

For the Returning Spouse

Prepare for a new normal.

After a year, everybody’s roles and responsibilities will be different, says Armin Brott, author of “The Military Father: A Hands-on Guide for Deployed Dads.”  “Your family had to figure out how to get along without you because they had no choice.  In addition, your [spouse] may have developed new friendships, hobbies, and routines.”  There’s no need to feel threatened about the new circumstances.  Use what you learned while deployed to bridge the gap.  For example, if your spouse told you about a new interest, find a way to share it.  Knowing what they’ve been up to in your absence makes it easier to reconnect.

Expect the unexpected from kids.

Your children may have taken on more responsibilities in your absence and may not want to give them up.  They may bristle at your attempts to discipline them.  “Younger kids may not know you and might even be frightened of you,” says Brott.  “Teens and tweens may be angry at you, particularly if you made promises before you left that you weren’t able to keep.”  Guarnieri scheduled time and activities with the kids that allowed her to reclaim her role in their lives.  With a little time and patience, things reverted to normal.

For the At-Home Spouse

A word of advice to the spouse who wants to drop old responsibilities on the returning spouse: Don’t.  “Being empathic may be a challenge because the at-home spouse has been in their own war zone,” says Broder.  “Although the soldier is home physically, psychologically he is not.  Some space and readjustment time is the best gift you can give.”  Watch closely for signs that your spouse wants to and/or is able to resume his duties and ease him back into the routine slowly.  While this may mean carrying the bulk of the load a bit longer, your extra effort will pay off.

Trying to make up for the missing time in a few days is akin to throwing a non-swimmer into the deep end of the pool. Resist the temptation to unload about everything that has happened in the past year.  Also, skip the big coming home party and focus on reconnecting with the immediate family.  Think of it as starting a new relationship and give yourself time to get to know each other again.  The reconnection will happen naturally.

Be honest with the children.

“Explain that the returning parent may be different at first and will need time to find his place in the family again,” says Leila Levinson, founder of VeteransChildren.com and author of “Gated Grief.”  “The silence or distance is their way of keeping the war out of the home.  Make it clear that the love in the family still exists and not to take things personally.  If you don’t tell the children what’s going on, they will fill in the blanks.”

Watch for signs of PTS.

While a return to normalcy will take time, months of anger, rage, isolation and unpredictability may signal that the servicemember is experiencing post traumatic stress (PTS).  Feeling needed by and connected to their families mitigates some of the effects of PTS but it is critical that they get professional help, even if you initiate it.  Contact your local VA for assistance.  The National Center for PTS and the Anxiety Disorder Association of America are great resources for dealing with PTS.