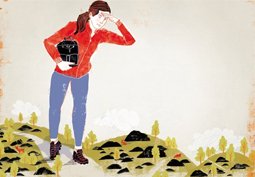 Daniele Seiss from the Washington Post brings this heartwarming story of one woman’s endless search to fulfill her mother’s dying wish:

Standing in what seemed an endless sea of boulders, we realized our search had come to a grinding halt. We had not found what we were looking for — not by a long shot. I was bewildered. In the deep green of Shenandoah National Park, the early summer day was coming to an end.

“I don’t know where else to look,” I told my husband.

My husband and I were searching for a particular rock that had held special significance for my mother. On her deathbed, she had told me of a large boulder in a forest in rural southern Virginia, not far from her former home, where she would go to contemplate, to meditate, to be alone and commune with the natural surroundings. I tried hard to remember every detail of that description. Her hospital room had been crowded with visiting relatives that day, and during the low buzz of conversation, she singled me out of the group, quietly beckoning me to her bedside.

“Dan, there is something I want you to do,” she whispered. “I want you to take my ashes and spread them at that rock.”

I had those ashes with me now, but somehow couldn’t find this rock she had said was so easy to reach. She and I had explored the back roads and hiking trails around her home together. Now, every road, every curve, pull-off and copse of trees — every rock — looked familiar. The summer day was leaning into dusk, and we were running out of time.

My mother, Susan, had married my father at 19, when she unexpectedly became pregnant with me. They started out with nearly nothing. She did what her role required, but silently loathed it. She took care of him, the housework, their babies. But she thought there had to be more to her life, and she took up hobbies for relief. She raised sled dogs, studied for her pilot’s license, went rock climbing, and played music with her brother. Sadly, the gulf between her and my father grew too large, and they divorced after 10 bumpy years. She kept her married name, Dolges, for the sake of her children.

She took my brother and me, then 9 and 10, and moved into an attic apartment in a nearby town. With my father’s financial help, she finished engineering school, finding work at first as a programmer and then as an engineer, eventually making her home in southern Virginia. She was smart, tough and beautiful, and I looked up to her as I did to no one else. She liked her new independence and the traveling sometimes required for her work. Friends and loves came and went every handful of years, but she never committed herself to anything or anyone who threatened her independence.

Then, a month after my wedding, in the summer of 2000, she told me she’d had a bad stabbing pain in the area of her liver. A doctor’s visit, biopsy and MRI scans revealed late-stage cancer all over her body, with two large masses on her liver and a kidney.

She saw specialists everywhere, who all told her the same thing: What she had was a rare neuroendocrine cancer. Only one in a million in the country succumbed to it yearly. There was about a 20 percent chance chemotherapy would be effective. If it wasn’t, she could expect to live roughly six months to two years.