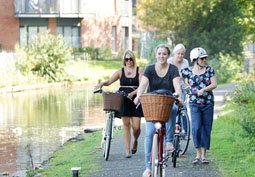 Have you gotten your fill of exercise this week? If you’re an adult living in the United States, a safe guess would be no.

A new government study estimates that nearly 80 percent of adult Americans do not get the recommended amounts of exercise each week, potentially setting themselves up for years of health problems.

Researchers at the Centers for Disease Control and Prevention (CDC) analyzed survey data collected from more than 450,000 U.S. adults ages 18 and older who were randomly phoned across all 50 states.

They were asked how often they engaged in aerobic physical activity outside of their jobs and for how long.

The U.S. government recommends adults get at least 2.5 hours of moderate-intensity aerobic exercise each week or one hour and 15 minutes of vigorous-intensity activity, or a combination of both. Adults should also engage in muscle-strengthening activities like lifting weights or doing push-ups at least twice per week.

Physical inactivity can lead to obesity and Type 2 diabetes, according to the CDC, while exercise can help control weight, and reduce the risk for developing heart disease and some cancers, while providing mental health benefits.

A study last year linked physical inactivity to more than 5 million deaths worldwide per year, more than those caused by smoking.

Not all was bleak, the CDC said. About 52 percent of surveyed adults said they met only the aerobic activity guidelines while 29 percent met only the muscle-strengthening components.

Overall, exercise rates were spread about evenly among racial and ethnic groups, with exercise prevalence a bit lower for Hispanic Americans than Non-Hispanic black or white Americans.

How much education the adult received also impacted exercise rates. More than 27 percent of the exercising adults were college graduates, while the lowest rates (12 percent) among those who had received less than a high school diploma.

The researchers also asked surveyed adults their height and weight to determine their body mass index (BMI), a measurement that determines if a person is underweight, normal weight or obese.

Exercise was less common in obese individuals (13.5 percent of exercisers) than for overweight (about 22 percent) and underweight/normal weight persons (roughly 26 percent).

A recent poll from Gallup-Wellbeing Index found West Virginia had the fattest residents in the country with more than 33 percent of its population obese, while Colorado had the lowest obesity rate in the country at 18.7 percent of residents.

The report calls on local communities and workplaces to provide more opportunities for adults to exercise. One suggestion was partnering up with a local school to allow adults to use work out equipment after hours. Adding bike lanes and walking paths could also lead more adults to become active.

“Improving access to safe and convenient places where people can be physically active can help make the active choice the easy choice,”

The CDC currently funds obesity-fighting efforts in 25 states, according to the report.

“Opportunities exist in all states to increase the proportion of adults participating in aerobic and muscle-strengthening activities,” the CDC researchers wrote for the study, published May 2 in Morbidity and Mortality Weekly Report.