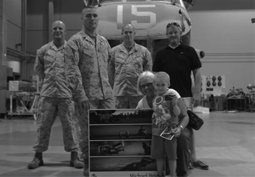 Marines never give up, and like a Marine, Michael has not given up.

A year ago, Michael was diagnosed with Neuroblastoma, the most commonly diagnosed cancer among children. He has been fighting it ever since, and is now in stage four, the final stage of the cancer.

“In many ways he has been through more than most of us will face in a lifetime,” said Col. Darrell L. Thacker, deputy commander of Marine Corps Installations East.

Thacker was instrumental in giving Michael a day of fun at Marine Corps Air Station New River, N.C. He said it was a great gesture on the Scholarship Foundation’s part in naming one of their scholarships after Michael.

“Calling him an Honorary Marine is a byproduct of the scholarship named after him,” said Thacker.

Pam Brown, Michael’s grandmother said despite the challenges of Michael’s condition, he is still a cheerful young boy.

“He was so excited when he was named an honorary Marine and got to spend a whole day at New River getting a tour of the entire air station,” said Brown. “The Marines have done so much for him and have shown our family a lot of support.”

Michael flew in a flight simulator, visited the Center for Naval Aviation Technical Training, and visited the Indoor Simulated Marksmanship Training Center where he shot simulated rounds out of a pistol.

“I am glad we could show him Marine aviation and create a happy memory,” said Thacker. “It is a small thing to help a brave boy deal with a significant challenge.”

Thacker said once he heard about Michael all he wanted to do was provide a fun memory for Michael as he continues his treatment.

“It gets hard, but knowing that there are service members willing to go out of their way to give Michael a special day is amazing,” said Brown. “We are truly grateful to all of the Marines that were involved in making this happen.”