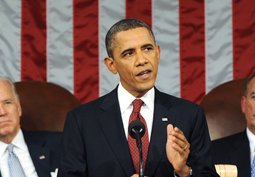 For President Obama’s fourth State of the Union address—and the first one of his second term—he laid out a long list of promises, requests and proposals to bolster the middle class.He was under particular pressure to address the economy due to the latest jobs report, which showed that the unemployment rate had bumped up to 7.9%.Despite this, his winning a second term was seen as a validation of his economic policy. So the president started the address by listing the economic achievements of his first term, including a healing housing market, a rebounding stock market, stronger protections for consumers (most likely referencing the busy-at-work Consumer Financial Protection Bureau), six million added jobs and a recovered auto industry.But the president admitted that there was still much more work to do—a familiar refrain from his re-election campaign. ”It is our unfinished task to restore the basic bargain that built this country. The idea that, if you work hard and meet your responsibilities, you can get ahead, no matter where you come from, what you look like or who you love.”President Obama’s hour-long speech contained many bullet points—more than we can mention here. We’ve pulled out the portions that could affect your finances and the economy in the next four years and beyond.

The Sequester Is a “Really Bad Idea”

The president turned first to the impending sequester: Some $85 billion in automatic spending cuts are scheduled to take effect March 1st. They’re meant to incentivize lawmakers to come up with a deficit reduction plan, but he called them “arbitrary” and “harsh,” noting that they “would certainly slow our recovery.” A notable sound bite that political pundits remarked upon after the speech: “We can’t just cut our way to prosperity.”

His proposal: Focus on reducing government spending on Medicare through “modest reforms,” and slow healthcare cost growth—the biggest challenge to reducing the deficit—by paying for the quality of medical care instead of the amount.

“Now Is the Time for Comprehensive Tax Reform”

One thing that Democrats and Republicans can agree on is the costly complexity of our tax code—Americans clock about 6 billions hours each year tackling their taxes.

President Obama gave a nod to this, saying, “The American people deserve a tax code that helps small businesses spend less time filling out complicated forms, and more time expanding and hiring—a tax code that ensures billionaires with high-powered accountants can’t pay a lower rate than their hard-working secretaries.” (A reference to Buffet’s proposed tax increase on the rich.) He did concede, however, that reforming the tax code wouldn’t be easy.

His proposal: Close tax loopholes for the wealthy and simplify the tax code.

“Every day, we should ask ourselves three questions as a nation,” President Obama said. “How do we attract more jobs to our shores? How do we equip our people with the skills needed to do those jobs? And how do we make sure that hard work leads to a decent living?”

He touted the 500,000 new manufacturing jobs the economy has added in the past three years after shedding them for ten years, and mentioned several companies—including Apple—that are bringing manufacturing back within our borders. But he wants to do more.

His proposal: Create more “manufacturing hubs” that turn struggling manufacturing towns into “global centers of high-tech jobs,” plus incentivize businesses to bring operations back to the U.S. through changes to the tax code and by upgrading infrastructure.

Linking Climate Change to the Economy

In his speech, as with many topics, the president consistently linked addressing climate change to creating jobs. Case in point: He said that upgrading the energy grid would attract more businesses to set up shop in America.

His proposal: Congress needs to pursue a “bipartisan, market-based solution to climate change.” And if Congress doesn’t act, his cabinet will be ready to hand him possible executive orders to “speed the transition to more sustainable forms of energy.” Broad goals he underlined included cutting the amount of energy wasted by homes and business in half, as well as transitioning vehicles off oil-based energy.

Mortgage rates have barely crept up from their rock bottom lows, but President Obama noted in his speech that too many financially responsible people couldn’t get their mortgages refinanced to a lower interest rate, which would save them money.

His proposal: “Right now, there’s a bill in this Congress that would give every responsible homeowner in America the chance to save $3,000 a year by refinancing at today’s rates … Take a vote, and send me that bill,” he advised Congress.

“Study after study shows that the sooner a child begins learning, the better he or she does down the road,” President Obama said, making another economic argument. ”Every dollar that we invest in high-quality early education can save more than seven dollars later on.” He lauded German schools, whose high school degrees are the equivalent of U.S. technical degrees. And he said that colleges must provide value for what students pay in tuition.

His proposal: Make high-quality preschool available to every child in America by supporting state programs, as well as reward schools that partner with colleges and employers to properly train high school students in science, technology, engineering and math—skills that are in high demand. Finally, he announced that his administration would debut a new “College Scorecard” that rates schools based on the return on tuition paid.

At the beginning of his speech, the president said, “Corporate profits have rocketed to all-time highs, but for more than a decade, wages and incomes have barely budged.” He revisited this topic pointedly, noting that a full-time employee earning minimum wage only takes home about $14,500 a year, which is below the federal poverty line.

His proposal: Raise the federal minimum wage to $9 an hour, plus tie it to cost of living increases.

Senator Marco Rubio from Florida gave the Republican response to President Obama’s State of the Union. His rebuttals included:

The president clearly has lofty ambitions for his second term, but he’ll need to convince an increasingly dysfunctional Congress to pass legislation supporting his proposals. Can he do it?