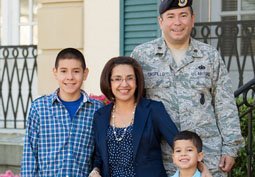 Verenice Castillo got to meet First Lady Michelle Obama and Prince Harry last week as she was named the 2013 Air Force Spouse of the Year. Military Spouse magazine selected her out of 2,200 nominations for her contribution to the U.S. Air Force community as a whole.

As a Security Forces spouse and a Key Spouse Mentor for two years, Castillo grew used to seeing spouses struggle with the challenges of deployments and reintegration to civilian life. She took it upon herself to develop the Strength for Spouses Program (S4S) at Maxwell Air Force Base, in Montgomery, Ala., where she is based with her family. Her program educates military spouses on how to be resilient, the benefits available during deployments, and reintegration tips, including suicide, and PTSD prevention.

“I want spouses to be ready, resilient, and strong to confront the challenges that deployments and reintegrations bring,” says Castillo. “As a Spouse of the Year, not only I would work with the Air Force, but with all branches and raise awareness on the lack of support that military spouses and families have.”

Throughout her time as a Key Spouse Mentor — a position she says is key to all squadrons all over the country — she realized that many spouses were not asking for assistance.

“The S4S program that I developed focuses on training and educating spouses on the resources already available at the base and throughout the Air Force,” says Castillo. “The Air Force is giving us the resources, so let’s use them. We have so many programs that are not being used. If we don’t use them, they’re going to get rid of them, so I’m raising awareness about our own resources. I’m not asking for anything, I’m bringing solutions.”

She says she also trains spouses by bringing counselors to the base.

“When our spouses come back, we are in different routines and are adjusted to be without each other,” explains Castillo. “It’s very difficult for families to readjust. We cover how to have a successful marriage, tips on what to do…stuff that will help around the house, and we also train them on how to identify the red flags of PTSD and suicide.”

The Key Spouse Crisis Intervention course is another program she provides, which offers five classes on how to deal with domestic violence and suicidal thoughts.

“If you are not trained enough, we might lose that spouse,” says Castillo. “We also train them on how to take care of yourself.”

The 37-year-old mother of two, 12 and 6 is also a social psychology student. She says she does her schoolwork online at around 11pm when all of her other work is done, and her children are asleep.

She says she met her husband, Security Forces Commander Tony Castillo, Jr., in El Paso, Texas, when he was already an active duty member in the Air Force, and they got married in 2000.  She was born in Juarez, Mexico, but moved with her family to El Paso when she was 16.

“At first, I didn’t want to go [to high school], because I did not know the language,” says Castillo. “It was difficult, but I was able to overcome the challenges. As I got older, I realized, I had the opportunity to come to this great country. I always told myself I would pay it back. I always had the desire of helping others.”

She remembers she thought her impact was going to be at her husband’s squadron, but quickly she saw the potential of going beyond that.

“I did it,” Castillo says excitedly. “I never thought I would be nominated for this award and impact other spouses at the Air Force level. I’m giving everything that I have so I can say, ‘Thank you.’ I can never say thank you enough to be able to come here and do what I wanted to do.”