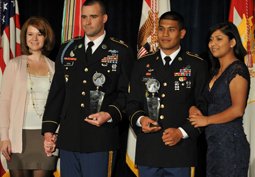 The two Soldiers received their awards at the Association of the United States Army’s Sergeant Major of the Army Awards Luncheon. They earned the titles after proving their mettle earlier this month at the Best Warrior Competition at Fort Lee, Va.

“It was about the total Soldier concept,” said Sgt. Maj. of the Army Raymond F. Chandler III. “We stressed them mentally as well as physically. We challenged them on their creative and critical thinking skills while under pressure. Each one (who competed) should be very proud of what they achieved to get to this place.”

“The competition was so fierce that it could have been anybody’s game,” said Senna, referring to the four-day-long competition, in which the top 24 Soldiers and NCOs from across the Army competed in physical fitness events, knowledge of military topics, rifle marksmanship, day- and night-land navigation and other warrior tasks and battle drills.

Senna, an infantryman with tours in Iraq and Afghanistan, said it was the hardest thing he’d ever accomplished because “we were up against the best the Army has to offer, and we’re the best Army in the world.”

Senna is assigned to B Company, 7th Army NCO Academy, in Germany. He has served in the Army 10 years and is pursuing an Associate’s Degree. He said he wants to complete his Bachelor’s Degree and attain the rank of command sergeant major.

Shrestha began his Soldier of the Year quest when he was a specialist, but has since been promoted to sergeant. He came to the United States from Nepal when he was 17, joined the Army at age 21. He said his wife, Elisha, helped him study. He said she went with him every weekend on land navigation exercises during his off-time, and she even ran track with him.

“I kept telling him he was going to win. I’m really proud of him,” said Elisha.

Shrestha, a power generation equipment repairer, is assigned to Group Service Support Co., Group Support Bn., 3rd Special Forces Group, U.S. Army Special Forces Command, Fort Bragg, N.C. He has served for three years in the Army and has completed a deployment to Afghanistan. He has a Bachelor’s Degree in computer information science and wants to earn a Master’s Degree in computer engineering and become an Army officer.

Both Soldiers credit their wives with being the best coaches; staying up with them long hours of the night, helping them study battle drills and tasks. They said their wives cheered them on when they were struggling.

Both said they will make the Army a career.