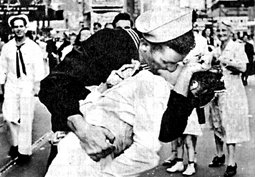 It was the kiss seen around the world, and Greta Friedman never saw it coming.

In a new book published this week, Friedman, of Frederick, is identified as the woman kissed by a World War II sailor in a famous Life magazine photo printed more than six decades ago.

In their new book, “The Kissing Sailor: The Mystery Behind the Photo that Ended World War II,” authors Lawrence Verria and retired U.S. Navy Captain George Galdorisi unravel years of misinformation and controversy to identify the couple as Friedman and George Mendonsa.

“Given the hundreds of jubilant couples kissing in Times Square on V-J Day, it is not surprising that many have mistakenly claimed to be the sailor and the nurse,” says a news release about the book, which goes on sale today.

Friedman recalled a number of imitators over the years, as well as nonbelievers.

“Some people believed me, and others did not,” she said.

“Patients would come in and they would say, ‘It looks like maybe the war is ending,'” said Friedman, who was working as a dental assistant.

As returning soldiers filled the New York City streets that Tuesday afternoon, Friedman, then 21, left for her lunch break and joined the excited crowds in Times Square.

“It really aroused my interest,” she said, “because everyone was very hopeful about the end of the war.”

On her way back to the dentist’s office on Lexington Avenue, Friedman, in her white uniform, was startled.

“I was grabbed by very, very strong hands,” she said.

Those hands belonged to Mendonsa, who had been marking the day with a friend and a few drinks. When he saw a woman in Times Square clad in what looked like the garb of a hospital-ship nurse, he grabbed her.

“I guess I had a soft spot for when I saw the nurses,” said Mendonsa, now 89 and living in Rhode Island. “If that girl did not have a nurse’s uniform, I never would have grabbed her.”

When Mendonsa finally let go, Friedman ran back to the office to tell her bosses that the soldiers had returned; she didn’t mention the spontaneous moment with a sailor whose name she did not know.

“He was very happy,” she said of her anonymous kisser. “It was a long war.”

When Friedman was dipped by those strong hands, photographer Alfred Eisenstaedt captured the moment.

The photo “V-J Day, 1945, Times Square” was published in Life magazine. Knowing nothing about it, Friedman just kept on with her life; she left New York and moved to Frederick about 40 years ago. She did not realize until the 1960s, she said, that her impromptu kiss had been captured on film.

A televised interview with photographer Eisenstaedt and Edith Shain, the woman believed to have been the recipient of the kiss, stirred something in Friedman.

“As soon as I heard that, I got together some photographs and sent them in to the TV station,” protesting that Shain was not the person in the picture.

“She had the wrong hairdo, (and) she was much smaller than I,” Friedman said.

Sixty-six years later, the Frederick, MD resident is still sure it was “definitely” her in the photo.

In the book, Verria and Galdorisi offer what the release calls “irrefutable proof” of Friedman and Mendonsa as the black-and-white images. Using photographic, forensic and anthropological evidence, as well as facial recognition technology, Verria said the authors were able to set the record straight.

The purpose of the book is not only to set the record straight, he said, but also to give credit where credit is due.

“I think their story is absolutely amazing,” he said. “It’s the type of thing you can’t really make up.”

Three and a half decades after Eisenstaedt captured the moment in Times Square, Friedman said she and Mendonsa were invited back to New York in 1980 for a photo shoot where it all began. Once again, she got a shock — this time from the photographer.

“He said he was sorry that he believed the wrong person,” she said.

Friedman keeps some copies of the original photo, but she generally remains mum about the experience.

“I don’t go around with a big pin on my chest,” she said.

Her no-longer anonymous kisser proudly talks about his time on the USS The Sullivans, a ship named for five brothers who died when the USS Juneau was sunk by a Japanese submarine in 1942.

Mendonsa chalks the photo up to fate.

“I feel as though it was almost meant to be,” he said, “that the sailor from The Sullivans winds up in the famous photo that’s known as the symbol for the end of World War II.”