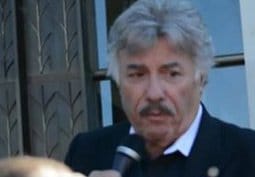 On October 11, 2014, while visiting the Eisenhower Presidential Library and Museum, American showbiz legend, Tony Orlando shared a story about his experience performing for former POWs – one of whom left a lasting impression.

As the crowd stood to join in singing Tie a Yellow Ribbon Round the Ole Oak Tree during his performance, he noticed that one member of the audience – sitting in the front row – wasn’t clapping, wasn’t smiling and didn’t stand along with the rest of the audience.

Upset that this audience member didn’t appear to be enjoying the show, Orlando went up to the veteran to ask him why. The man introduced himself as John McCain – a young veteran who was recovering from severe injuries he received as a POW during Vietnam. He wasn’t standing and clapping because of the injuries he’d sustained.

During their interaction, the two men made a personal connection that has lasted for decades.

Check out this video to hear the whole story.

Orlando’s story celebrates just one interaction with a single veteran, inspiring fans across the world to get out and thanks the veterans in their community for their service!