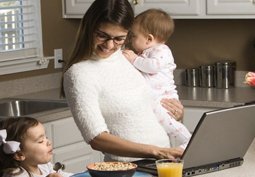 If you’re carrying credit-card debt, you know it’s a financial anchor that’s holding you back from truly enjoying your life. With interest rates averaging about 13 percent to 16 percent, there is no reasonable way to get ahead — or even stay afloat — financially unless you get those cards paid off.

So in honor of the Fourth of July, take this opportunity to declare your independence from your credit-card debt. Here are four straightforward steps to set you on your path toward that independence:

1. Track and reduce your spending.

Write down where every penny of your money is going. Once a week, review the list and ask yourself whether you truly needed to buy what you were buying or whether it was something you could have either lived without or gotten a cheaper substitute for. Make it a priority to cut back where you can to free up the cash to pay down your debts.

2. Figure out how you may be able to earn some extra income.

Overtime and moonlighting are time-tested ways to earn some extra cash on a regular basis to cover your costs. If those aren’t feasible, consider holding a garage sale or selling stuff you no longer need via eBay (EBAY) or Craigslist. You may at least be able to get a one-time infusion of cash to make a serious dent in your debt.

3. Negotiate your interest rates with your credit card companies.

If you have a good payment history, they’ll want to keep you as a customer and may be willing to lower your rates with a simple phone call. If your payment history isn’t particularly good and you’re paying penalty rates as a result, they may still be willing to work with you. After all, they’d rather get their cash back at a lower interest rate than lose everything should you declare bankruptcy.

4. Build and execute a debt snowball.

Some folks find that they’re more motivated by the quick wins they get by working their snowball plans from the card with the smallest balance to the card with the highest balance. If that’s what it takes to get you motivated, it sure beats not paying off those cards. Just understand that you’ll likely wind up paying more in interest by tackling the cards by balance order rather than by putting the same dollars each month toward your plan and working in interest rate order.

Light a Firecracker and Get a Plan in Motion

Those four straightforward steps are what it really takes to earn your independence from your credit-card debts. It’s not an instant process, but once you’re through it, you’ll appreciate both the freedom from your debts and the extra cash in your pocket from the money you no longer need to put toward those payments.