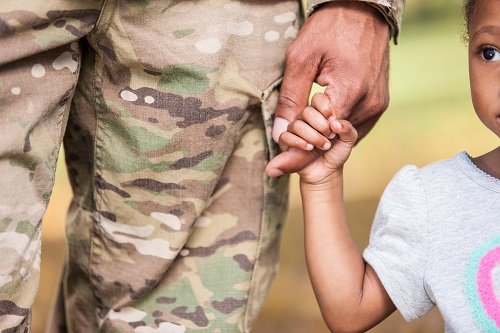 Why & How to Support Your Servicemember

All over the U.S., thousands of families are separated due to the fact that U.S. military is waging war somewhere out in the world. For example, warfare in Iraq or Afghanistan has been going on for nearly two decades now. And with more American youth ineligible to enroll for an Army service every year, the core of the U.S. military lays on the back of 40+ years experienced soldiers, who devoted their lives to serve and protect our country.

But what about military families?

There is another side of the medal here also, and that’s concerning lack of parenthood for all the children growing up in the absence of their parent serving abroad.

In the wake of President Trump’s decision to deploy 4,000 more American soldiers to Afghanistan, we can conclude that there will be even more military deployments and more children left alone with just one of the parents in the years to come.

Living in a military family means learning how to accept everlasting life changes and mastering the skill of constantly moving on — moving to a new house, moving kids to a new school, moving on with your life…

The transition period is something that can be easily overcome, but living in transition is a whole other thing. With U.S. Army professionals being parents at the same time, those changes and their permanent absence from home leave their partners to take care of their children on their own.

And the fact that the family has just moved to the new city isn’t helping at all.

At the infant stage, for the children, it can prove tough to adapt to the new neighborhood, new school and making new friends can also become an obstacle. Also, children at elementary school age are less likely to accept new people in their surroundings.

This is why military families have to think of the other ways to secure their children’s education. For example, many of them now choose homeschooling programs.

It seems that the U.S. government will keep its active military presence in the war zones in the years to come. The long-standing tradition of the military has kept the popularity of serving in the Army and military officers will always be respected and given credit to.

If you’re looking for unique ways to celebrate a servicemember’s commitment, dedication, and honor in serving in the military, there are several things you can do to show your appreciation. You may choose to make them a special gift, such as DIY’ing a map full of pins that highlight all the places you’ve traveled together, including where they deployed. Or, you could set aside one day a month as your own personal “military appreciation day” to celebrate them.

Or, perhaps you could give them a “challenge coin” made by a company such as Embleholics to acknowledge your servicemember’s courage. These coins represent not only the affiliation to certain organization within the Army, it also serves as somewhat an emotional bond connecting the family to the family member serving his country somewhere far from his/her home.

It can also be seen as a token of nation’s gratitude and acknowledgement for everything an individual has done for the country. Families can also take pride in knowing that a coin has been awarded to their family member.

No matter where you are, be present.

No matter what way you choose to support your military member, your actions and words can speak as loudly as theirs. And, let’s not forget the kids. Growing up with the absence of a parent and being living in a constantly changing environment can create psychological or social challenges. Bringing each other closer together by sharing thoughts, ideas, emotions and experiences with each other is an important factor in helping to make appropriate adjustments when family members are serving the country somewhere away from home.

Hellen is the chief strategist at Marketee.rs. She loves a good digital marketing strategy, and isn’t afraid to ask questions every day to keep up with the industry’s trends. If you have any comments or questions, shoot her a question at @hellen_mcadams.

3 Ways to Show Servicemembers You Care

Want to Mentor Other Military Spouses?